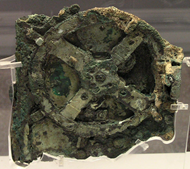 The Register reports that scientists from the USA and Greece are returning to the site where the Antikythera Mechanism, the world’s oldest computing device, was found in 1901. The Antikythera Mechanism was an apparatus of interlocking gears that was dated to 100 BC. By turning a crank that rotated the gears, the device was believed to have been used as a navigational aid and possibly to predict the path of the planets. The device’s age is highly unusual – devices such as this did not come into use for another 1,400 years.

A researcher who led the study of the device explained its importance:

“This device is just extraordinary, the only thing of its kind. The design is beautiful, the astronomy is exactly right. The way the mechanics are designed just makes your jaw drop. Whoever has done this has done it extremely carefully … in terms of historic and scarcity value, I have to regard this mechanism as being more valuable than the Mona Lisa.”

Archaeologist have mapped of the area and expect to spend three weeks hunting for more of the unusual computing devices.