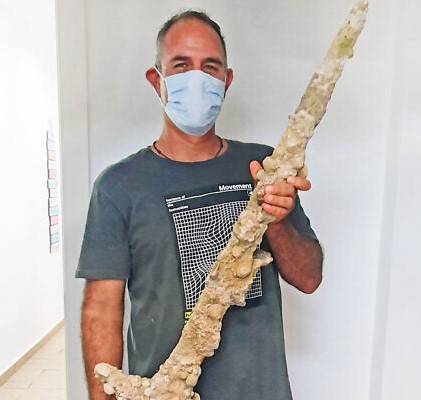 A diver in Israel found a 900-year-old Crusader sword on the Carmel Beach seafloor in Israel. The sword was found during a dive off the coast. Waves and undercurrents had shifted the sand to reveal the sword and several ancient metal anchors. The sword is encrusted in marine life but scientists say it is “preserved in perfect condition”.

The man feared someone else would take the sword so he retrieved it from the waters and turned it over to the Israel Antiques Authority who say, once the sword is cleaned up, it will be put on display for the public.

The Carmel coast, with many natural coves, provided shelter for ships during storms. Discoveries show that it was used as early as 4,000 years ago as a natural anchorage site and the sword indicates it was still in use 900 years ago.

“These conditions have attracted merchant ships down the ages, leaving behind rich archaeological finds. The recently recovered sword is just one such find.”