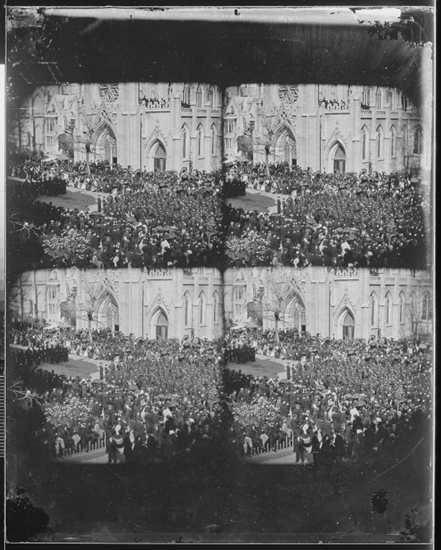 Experts at the National Archives say it’s long been a mystery – what the photographs depict, why they were photographed, and where they were shot. But Paul Taylor, a retired government accountant from Maryland, believes the scene was shot on Broadway, outside New York’s historic Grace Church, and that it was shot on Tuesday, April 25, 1864 – 11 days after Abraham Lincoln was assassinated inside Ford’s Theatre in Washington. According to Taylor, the crowd in the picture is waiting on a horse-drawn hearse in order to pay homage to the death of the late President during a cross-country funeral procession that made its way around the United States. If Taylor is correct, a long-standing mystery has been solved while providing another piece of rare historical documentation of the event.

The Washington Post explained how Lincoln’s procession spanned the country:

“The funeral observances for Lincoln, who was assassinated by actor John Wilkes Booth on April 14, 1865, went on for more than two weeks. During that time, the president’s body was moved by train on a 13-day, 1,600-mile journey from Washington to Springfield, Ill., where he was buried May 4. Along the way, the train stopped in over a dozen major cities, and his coffin was removed for numerous processions and elaborate tributes.”

New York was the fourth major stop on the journey.

“The president’s coffin, with the lid unfortunately open, was placed on view in New York’s City Hall on April 24, according to Swanson’s account. Lincoln had been dead for 10 days, and his face was not a pleasant sight.”

Taylor drew his conclusion by comparing the newly-discovered funeral-procession images with historic photos depicting the Grace Episcopal church which is located on Broadway at Tenth Street in Manhattan. From the angle of the shots, it appears as if the photos were taken from the studio of famed Civil War photographer Mathew Brady which was located across the street from the church.  Researchers pointed out additional evidence which supports Taylor’s theory.  For instance, many people in the crowd are holding umbrellas and the street appears to be wet which falls in line with an eyewitness account written by Walt Whitman who reported that during the procession, “the rain drove the women indoors”.  Additionally, shadows on the street and flowering of the bushes (lower left corner of photograph) seems to indicate a spring event which coincides with the timing Lincoln’s “death pageant”. 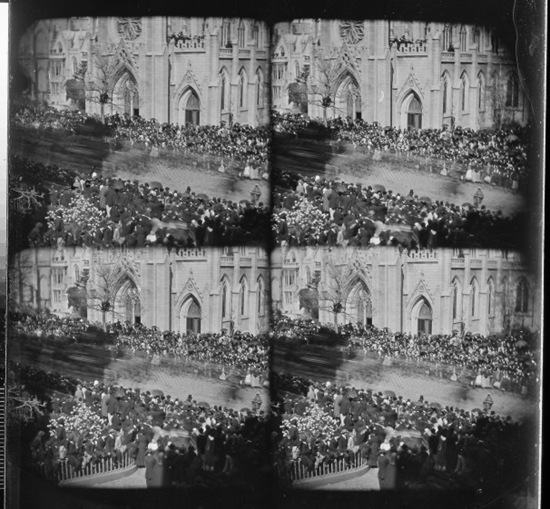 You can check out higher-resolution versions of the photos below.  Note the similarity between the church in the newly-discovered photos and more recent photos of Grace Church.  In addition, compare the blurred funeral hearse image with the illustrations of Lincoln’s hearse.  Yeah, “case closed”.