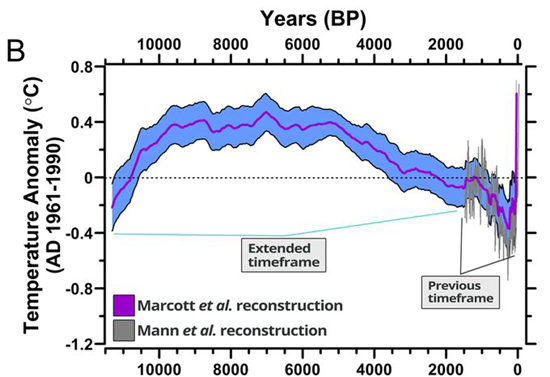 A new study published by Science reconstructs global temperatures further back than any previous study, going back a whopping 11,300 years to study historic global temperature changes in the Earth’s atmosphere.  The most notable study prior to this was Penn State University’s 1999 study which used tree rings to show a massive uptick in temperatures in the 20th century, when humans began dumping large amounts of greenhouse gases into the atmosphere.  The new study uses objects collected from more than 70 different sites, primarily fossilized ocean shells that have been unearthed by oceanographers.  Chemical tracers in the shells of fossilized shells link closely to temperature changes in the environment.

According to Mother Jones:

“By studying oxygen isotopes in the fossilized plankton shown below, for example, scientists can deduce that it formed its shell at a time when Greenland was fully without ice. The Earth should be nearing the bottom of a several-thousand year cool-off (the end-point of the rainbow arc in (B) above), if natural factors like solar variability were the sole driving factors. Instead, temperatures are rising rapidly.”

The author of the study noted that it will surely be attacked.

“Certain that professional climate change deniers will attack the study and the authors, in an effort to discredit this important work, especially given the close ties between the two scientists’ research. It will therefore be looked at as a threat to vested interests who continue to deny that human-changed climate change is a reality.” 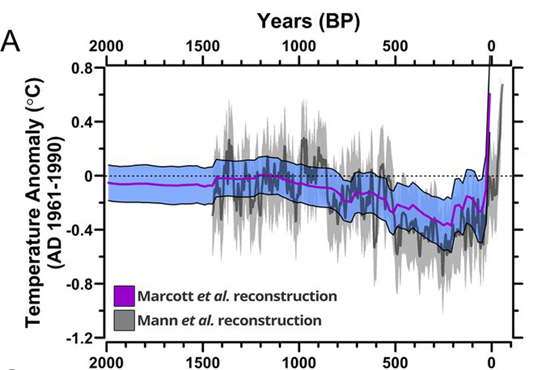