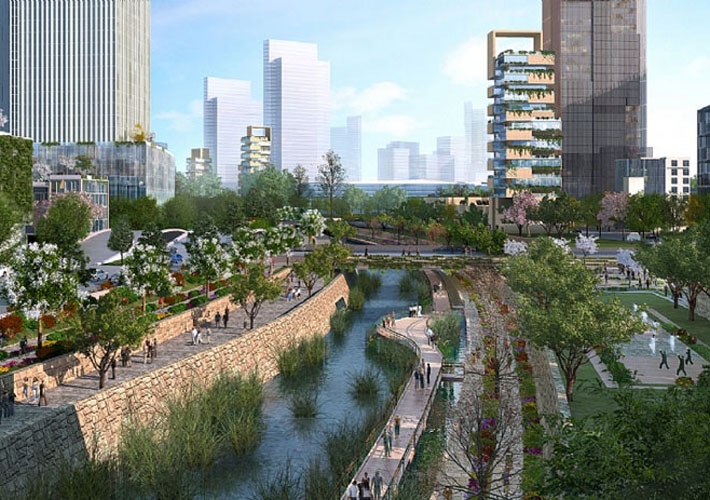 China plans to build a 120 million square foot city – from scratch.  Designed by architecture firm KPF, the Meixi Lake Master Plan project will be built in the metropolitan area of Changsha, China and will integrate mountains, lakes, parks, and canals in its architectural design. The city will be built around a 40 hectare lake which will act as the “central park” for the city.  Radiating from the lake will be a series of canals that, along with a pedestrian tram walk to reduce automobile traffic, will provide transport to each of eight neighborhood clusters built in an arc around the lake.  These neighborhood clusters will feature unique architectural design elements to give each neighborhood area a “sense of place”.  The neighborhood clusters will be separated from each other using “green buffers” which will accommodate exercise fields and natural landscape elements. The radial geometry of the city plan allows for a highly efficient transport system, reducing potential pollution and energy use. Other environmental strategies include collective gray and black water systems, distributed energy plants, and urban agriculture.

According to the designers:

“Overall, the design of Meixi allows the vitality of a dense metropolis to be combined with the beneficial qualities of a natural setting. This forward looking community will benefit from and promote the development of new technologies. Both a major convention center and an Education/R+D sector will encourage Chinese and foreign businesses to consider this an ideal place to demonstrate new ideas about the way we live. As a functional center, Meixi Lake will serve as the head of the West Changsha Pioneer Zone; as an urban model, we expect it to lead the way to a new way of thinking about the city of the future.”

Below are a series of pictures from the project design.