The latest comScore figures for the June through August 2012 period, show Samsung still at the top of the smartphone market share ratings with a 25.7% share of the market although the change from the prior 3-month period was flat. LG remains second with a 19.1% market share and Apple comes in 3rd with 19.1%, an increase of 2.1% from May 2012. It is interesting to note that Apple showed the biggest gain in market share even though the figures closed before the iPhone 5 was released. We expect to see an even bigger increase from the iPhone 5 bounce, possibly even passing LG to take back the 2nd place spot. 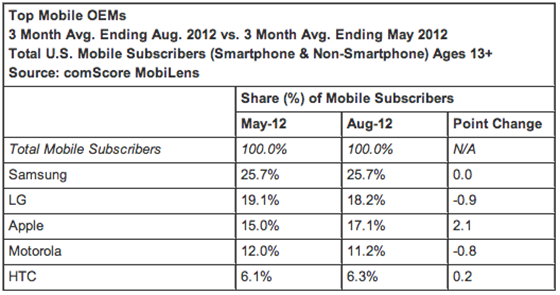 Overall, Android operation system usage increased by 1.7% giving it 52.6% of the operating system market share while Apple rose 2.4% to claim 34.3% of the market share. Both increases appear to have come at the expense of RIM (Blackberry). Microsoft share decreased further to 4%. We expect to see a small increase after Windows 8 Mobile launches (again, likely at the expense of RIM). 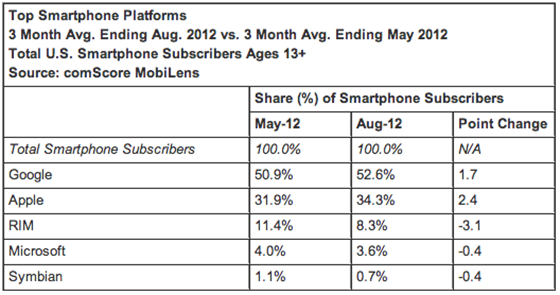 The comScore figures are collected from 30,000 U.S. mobile subscribers.