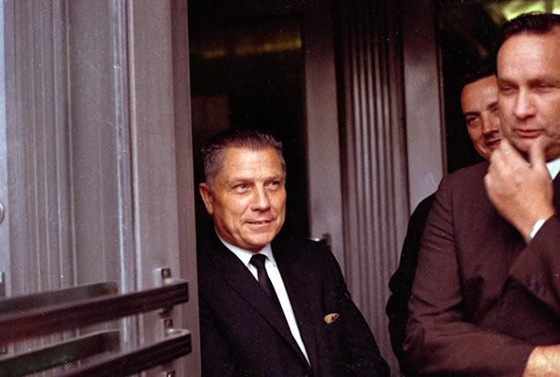 Tony Zerilli, an ex-Detroit mafia boss, has stated that he knows where the missing body of Teamsters Union leader, Jimmy Hoffa is buried. Anthony ‘Tony’ Joseph Zerilli (October 24, 1927 – March 31, 2015) was an Italian-American mobster from Sterling Heights, Michigan. From 1949 he was one of the majority owners of the highly profitable Hazel Park Raceway. In 1970 he succeeded his father Joseph Zerilli as head of the Detroit Partnership (“The Partnership”) criminal organization.

After Zerilli was convicted and imprisoned in 1974, his father came out of retirement to lead the organization until his death in 1977, when Jack Tocco became head of the Partnership. Anthony Zerilli was later his deputy. The Detroit Partnership is believed to be part of the American Cosa Nostra.

According to the 85-year-old Zerilli shortly before his death, Hoffa was buried in a field outside Detroit, about 20 miles from the restaurant where he was last seen in July 1975. Zerilli explained that the mafia’s original intent was to move the body and not leave it in the shallow grave it was temporarily placed in.

“I think this is the most credible person to ever come forward to talk about this story. If there is a body to be found, he’s the guy to lead you to it. This is someone who definitely could have intimate knowledge of what happened.”

Teamsters union boss Hoffa was last seen on July 30, 1975 outside a restaurant in Oakland County, Michigan.