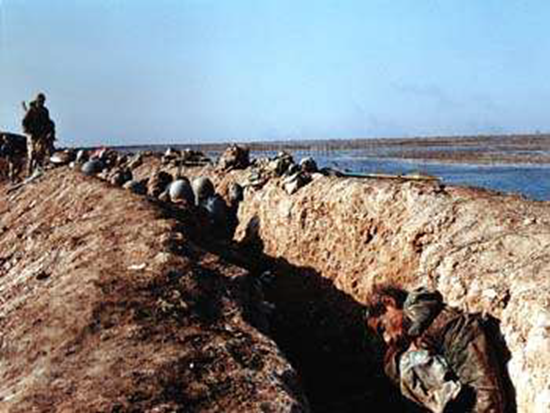 “I came through right after the lead company. What I saw was a bunch of filled-in trenches with people’s arms and legs sticking out of them… We could have killed thousands.”

On February 24, 1991, in the first two days of ground fighting known as Operation Desert Storm, an estimated 8,400 U.S. soldiers began an assault against 8,000 Iraqi soldiers along a 10-mile-wide stretch of border between Iraq and Saudi Arabia, a seemingly impervious boundary that was laced with barbed wire, dangerous minefields, and fortified trenches. When reporters reached the area the day after the attack, they were told that not a single American soldier had lost his life. However, not a single Iraqi body was to be seen. War correspondent Leon Daniel said:

“This ferocious attack had not produced a single visible body. It was a battlefield without the stench of urine, feces, blood, and bits of flesh.”

Where were the bodies?

To cut through the Iraqi defenses, the tanks were modified to include anti-mine plows that would simply plow over and bury alive the defending Iraqi soldiers. Operating like snowplows, the tanks drove alongside the ditches, filling them in, while Bradley fighting vehicles equipped with heavy machine guns and 25-millimeter cannons straddled the trenches, driving alongside the tanks “pumping machine-gun bullets into any Iraqi troops” who tried to climb from the trenches before being buried alive. The vehicles moved swiftly, and it is estimated that at least hundreds, if not thousands of Iraqi troops were buried alive inside their own trenches.

The operation had been rehearsed repeatedly in the States using trenches built according to satellite photographs and it went without a hitch. Before reporters were allowed onto the scene, armored combat earthmovers (ACEs) moved in to smooth away any hint of carnage. Thus, what reporters saw was a perfectly sterile battlefield.

According to Captain Bennie Williams:

“Once we went through there, other than the ones who surrendered, there wasn’t anybody left.”

It is unclear how many Iraqi soldiers were buried alive since naturally, no Iraqi body count was possible after the assault. When news of the burials leaked months later, Col. Lon Maggart told reporters:

“People somehow have the notion that burying guys alive is nastier than blowing them up with hand grenades or sticking them in gut with bayonets. Well, it’s not.”

The disclosure of the live burials was first reported by Newsday in September 1991. Army officials strongly denied any attempts to hide the breaching operation and pointed out that senior commanders had given extensive interviews about the maneuver after the war (although Defense Secretary Dick Cheney made no mention of the burials in his interim reports to Congress). No journalists in the combat pool during the breaching operation reported the live burials (other than mentioning that few slain Iraqis had been visible). The entire operation was completed in about three hours.