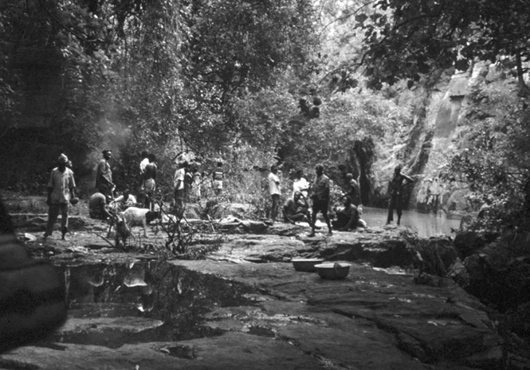 In Dafara, a dry, flat, featureless land located near the African city of Bobo Dioulasso in the West African savanna of Burkina Faso, you will find a strange crevice, seemingly out of place, accessible by a single trail leading into dense foliage. If you follow the trail into the dark fissure, you will find that at its end lies a 100-meter diameter hole, wedged between two cliffs, that is filled with murky, putrid water. It is strange to find a pool of water in this area, particularly given that the nearest river is over fifty miles away, but even stranger is the man-eating creature that is reported to live within its watery depths.

The Rocks, aka Dafara Canyon

Visitors to the pond located at the bottom of the crevice, which the natives call “The Rocks”, instinctively cringe at the horrid smell of rotting flesh and its dark banks littered with blood, flesh, and a variety of bones. You see, to the natives, The Rocks is a place where animals and other beasts are ritually tossed into the deep crevice to feed a strange creature which lives in the water below.

The Dafara Creature is worshipped – and feared

The first recorded report of the Dafara Creature came from a missionary known as Pastor Robin S. Swope in the mid-1980’s. Pastor Swope says he witnessed the monster during a ritual feeding and described the creature as enormous, 8-9 feet in length, with black, smooth skin, no dorsal fin and a large, smooth hump on its back. Natives, who suffer from famine and an infant mortality rate close to 10%, routinely toss raw flesh to the creature which they consider a “god” who will protect them and provide for them. But while they worship the strange beast, they also fear it. Children are not allowed to go near the water’s edge and anyone, visitors included, are warned never to enter its depths. As Pastor Swope wrote:

“It is a fear that also lives in legend. You cannot go in the water of Dafara. The god will eat you alive.”

Natives often tell the story of a Western explorer who ignored their pleas to stay away from the small pool of water. The natives tried in vain to explain to the stubborn man that anyone who enters the water will die. Swope confirms:

“Such was the fate of the first Western explorer who happened upon the site in the middle of the nineteenth century. It is rumored that he scoffed at the natives’ superstitions and dove off the cliffs into the milky water of the pool. He never surfaced. Days later they found his bones along the shore.”

A report of Pastor Swope’s sighting

Pastor Swope’s sighting of the creature occurred in the summer of 1986. At the time, he was a travelling missionary visiting the city of Bobo Dioulasso when other missionaries suggested a tour of the legendary Dafara site. He watched as the natives tossed live chickens into the water. Suddenly, the water began to swirl, bubbles erupted from its depths, and a large hump broke the surface of the water as the chickens were pulled under the water’s surface. As he described it:

“The creature’s back rose out of the water until the enormity of its size could be revealed. At the time I estimated it to be the size of a large couch that was in the lobby of the missionary station where we were currently residing. It was about 7 feet long. I saw no other feature on the animal, neither eyes nor mouth- just the large hump and the splashing about of something a few inches away from it where the meat had been thrown. After it had finished a small chicken, the ebony mass submerged and we did not see it again.”

What is the Dafara Creature?

There are no proven explanations for what lives at the bottom of the pool of water. Some believe that the creature is a prehistoric animal that has been trapped within the pond (it is isolated from any other water source) for many years. A earthlier suggestion has also been offered – possibly the creature is a huge fish that has reached its tremendous size due to the high-protein diet it obtains from the sacrifices supplied by the natives. Or maybe the Dafara Creature is nothing more than a legend.

We may never know what the Dafara Creatures truly is but what we do know for certain, is that the natives will never, ever enter the water.