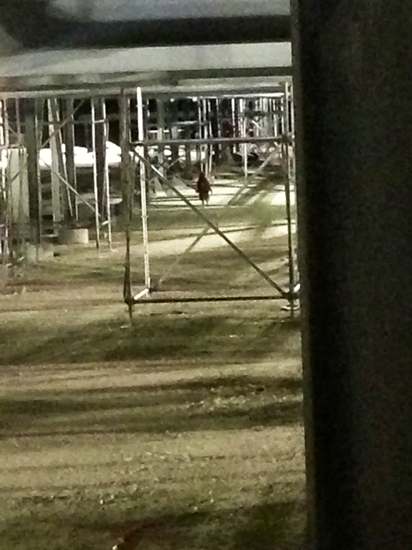 As long as they’re not ripping somebody’s face off, tiny mysterious creatures are always fun.  This week a new little pigmy-like creature made an appearance in the small town of Kennedy, Texas.  It could be a play of light, a child in unusual clothing, or a well-planned hoax. Regardless, reports of tiny, little beasts are always cool.

World UFO Photos and Phantoms and Monsters received a photograph from a reader who was seeking some sort of explanation for what he had witnessed. According to the report, at around 3:00 AM, an employee working the night shift at a Texas-based natural gas plant noticed something swaying from side to side out of the corner of his eye. The worker, who was in the basket of a man-lift at the time, grabbed his cellphone and quickly snapped a photo of the creature.

The worker undid his harness and jumped from the basket but by the time he reached the ground, the mysterious creature was already gone. Local Kennedy, Texas police were called to the scene to investigate. Authorities walked the grounds of the natural gas plant but could find no trace of the creature.  The picture below was featured in the local newspapers.