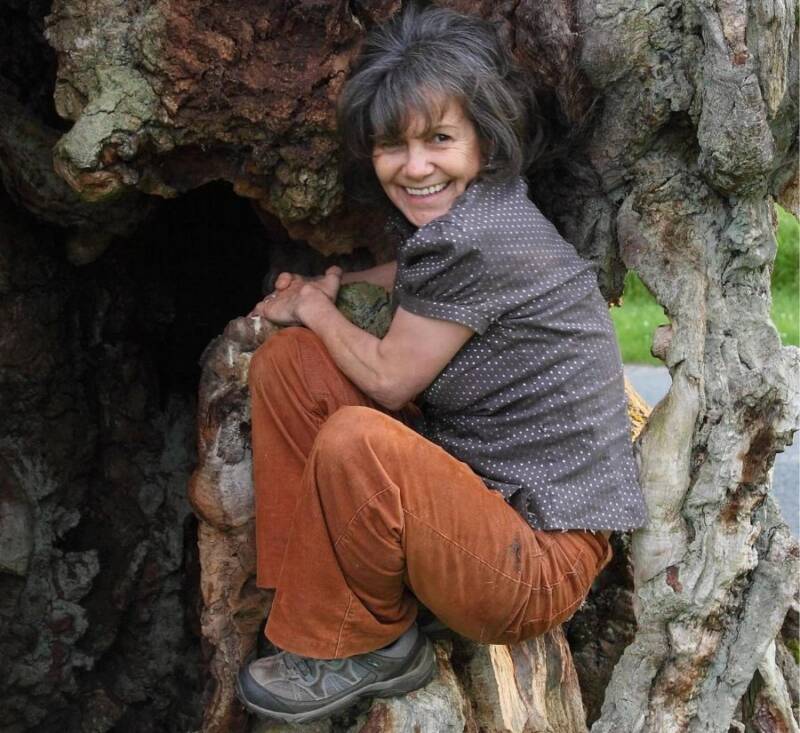 It seems too bizarre to be true, something straight out of a Tarzan movie.  But cases such as this have been documented before and a professor of psychology at Bucknell University who specializes in feral children has studied the case and found no evidence that she is lying.  Marina Chapman, after the encouragement of her grandchildren, published her memoirs in her new book, “The Girl with No Name”, in which she revealed that at four years old, she was kidnapped and abandoned in a Colombian jungle where a troupe of capuchin monkeys, who are known to bond easily with humans, found her and adopted her as one of their own.

Marina Chapman finds herself in the middle of a monkey troupe

In her book, Chapman recalls how she was discovered by the monkeys.

“All trace of sleep had gone now, and as I opened my eyes fully, I realized I wasn’t just surrounded, I was being watched. All around me, at a distance of several paces, were monkeys. Motionless and afraid again, I tried to count them…  After a short time, one of the monkeys left the circle and began to approach me. He was one of the biggest, with a coat that was grayer than the others, and there was something about the way he loped towards me so boldly that made me think he was the one who ran the family.  I was just about to squeeze my eyes shut when I saw him reach out a wrinkly brown hand and, to my surprise, with one firm push, knock me over onto my side. I quivered on the soil, tensed for the second blow that was surely coming. But it didn’t and after some seconds I dared open one eye again, only to find that the monkey had lost interest. I sat and watched them for a long time. I was mesmerized and felt somehow reluctant to leave them. There was something about the way they seemed to enjoy one another ’s company that made them feel like a family. While close to them, I felt like I wasn’t alone anymore.”

Capuchin monkeys accept a little girl as one of their own

Chapman, who does not know her exact age but guesses she is somewhere in her mid-60’s, says she was raised by monkeys in the Colombian jungle for about five years.  She survived by eating their discarded fruits and nuts, eventually learning how to scavenge bananas and other wild food.  After a few years of zero human contact, she forgot her parents – and even her own name.

She learned to climb high in the trees, a feat which her grandchildren say she can still do today.  Over time, she says she developed dry, leathery skin and powerful sinewy arms and legs, learned how to sleep in a hollowed-out piece of tree trunk, and discovered an ability to communicate in their rudimentary language.  At one point, one of the older monkeys saved her life after she had eaten poison berries.  The animal led her to a brackish stream and submerged her head in the water after which she began coughing and vomiting, purging the berries from her body.  She told reporters, “I learned from them. They became my family”

NBC explains how she found her way back to civilization.

“After living with the monkeys for several years, Chapman says she encountered hunters who tried to sell her into domestic slavery in the Colombian city of Cucuta. She then ran away and became a thieving street kid before being adopted by a loving family in Bogota as a teenager and giving herself the name Marina.  Chapman went from living in the wild as a child to living the domestic life when she met her husband at a church in Bradford, England, in 1978, after traveling there with a family who employed her.”

Chapman’s story was not a new one to her family and friends who say she has been talking about her experience in the jungle for several decades.  Hearing the story throughout their youth, her two daughters convinced Chapman to share her story with the world.

“Her story made sense.  When you are raised by her, you just find it normal.  She’s just not a lady, every morning she wakes up and she’s like ‘I have a house! I’ve got feet!’ You know, the simple things.  I got bedtime stories about the jungle, as did my sister. We didn’t think it odd — it was just Mum telling her life. So in a way it was nothing special having a mother like that.”

Is Chapman’s story a hoax, false memories, or something else?

To date nobody has found evidence that her story is made up and in fact, many aspects of her bizarre tale make sense.  During the time of her abduction, around 1955, child kidnappings in Colombia were common and it is a well-known fact that capuchin monkeys bond easily with humans.  And cases such as hers have been documented before.  In 1991, the ‘Ugandan monkey boy,’ six-year-old John Ssebunya, was rescued after three years in the wild, being cared for by vervet monkeys. And in 1996, a two-year-old Nigerian called Bello was found living with chimpanzees.

Chapman’s two daughters traveled to Colombia to verify her story.  There they tracked down many people who remembered the “wild child” and verified their grandmother’s story.  In October 2012, a Sunday newspaper traveled to Colombia and tracked down Nancy Forero Eusse, the granddaughter of the woman who ‘rescued’ Mrs. Chapman. Nancy recalled how ‘Marina Luz’ had often shared her story of being raised by monkeys. At the time, the future Mrs. Chapman would like to spend her afternoons sitting on the branches of a mango tree. ‘It was such a curious thing,’ recalled Ms. Eusse. ‘She would hang out in that tree. Not just in the branches, but high up, right at the top.’

The National Geographic channel is now planning a documentary in which they will return to the jungles of Columbia with Mrs. Chapman.