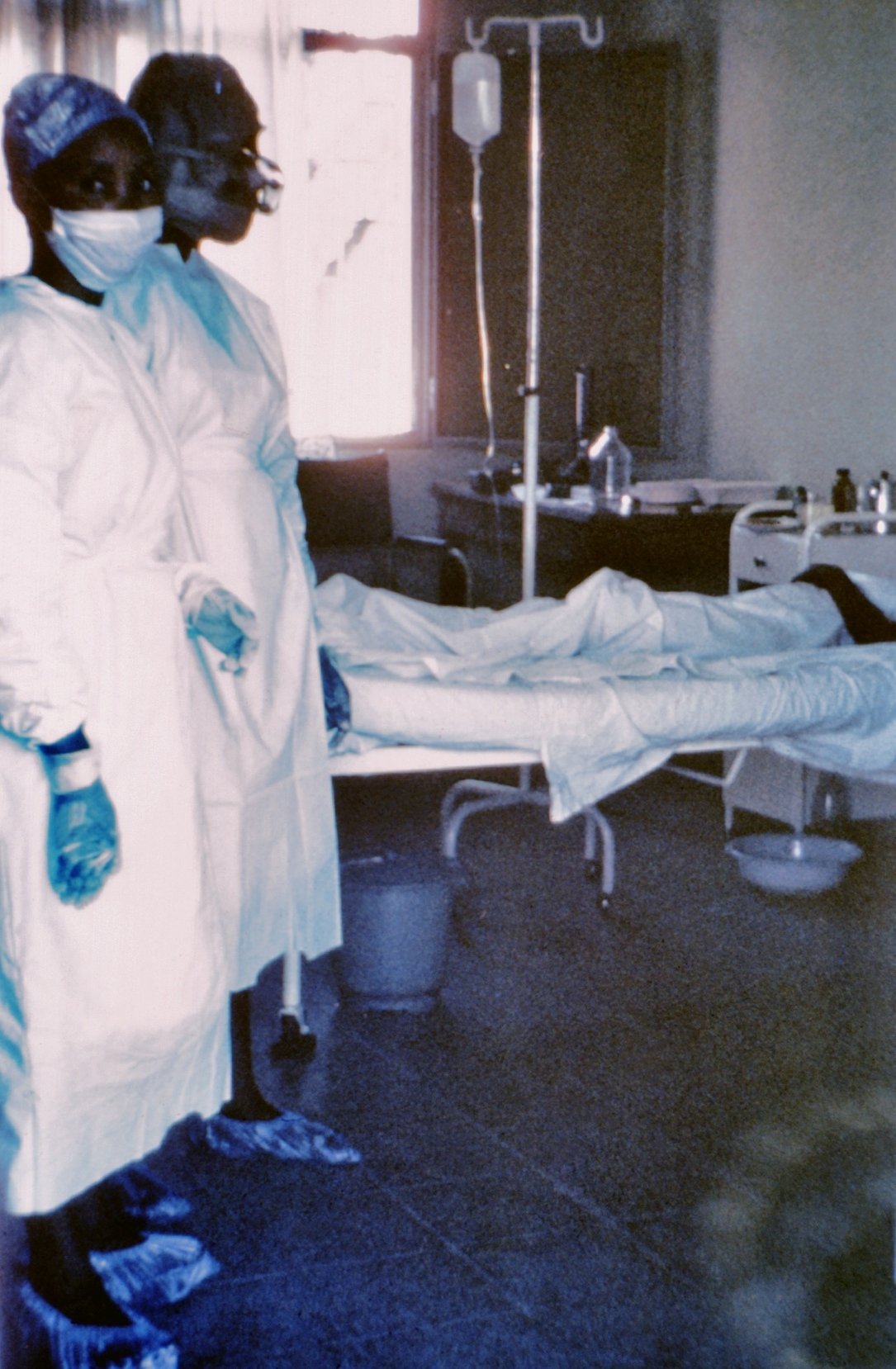 It began in 1976 in a small village in Congo called Yambuku. The news leaking out of the area was terrifying – lifeless bodies of feverish birds falling from the sky and human bodies piled by the roadsides formed impressions of the apocalypse in the minds of medical professionals. When samples of an infected Flemish nun’s blood arrived in Belgium, scientists immediately recognized they were dealing with an unknown viral invader– and that it was extremely dangerous.

A team of international scientists, led by Karl Johnson, quickly set off for the Democratic Republic of the Congo (then called Zaire) and after overcoming logistical problems with their flight (pilots refused to fly into the infected area), landed in the Congo. Some personnel, with invalid passports, sneaked through customs and boarded a cargo plane loaded with a Land Rover that was destined for Bumba, 700 miles to the northeast. From Bumba, the plan was to drive the Land Rover to Yambuku – ground zero for the deadly viral infection.

The plane landed (and quickly took back off again) and was immediately surrounded by frightened locals who thought the plane was sent to evacuate them from the area. Military police held locals back while officials unloaded the Land Rover, now packed with medical equipment and several scientists. One scientist later told reporters:

“My natural skepticism began to fall away, replaced by doom. I was convinced by the evident fear of the pilots and the townspeople and their desperate attempts to flee the town”.

After a treacherous drive through the native land, they arrived in Yambuku to find a mission, which was being utilized as a temporary hospital, surrounded by a fence with a sign posted that read “anybody who passes this fence will die” (11 of the 17 staff members would eventually die from the virus). From the mission, they embarked on a vigorous search through local villages in an attempt to determine what the virus was, how it was spreading, and where it came from.

As they travelled through the area, they found that many terrified villages had built barricades along roads and paths to keep outsiders out. After carefully talking their way into the areas, scientists examined local mosquitoes, pigs, cows, bats, rats (hand caught by village youths paid to complete the task), and bedbugs – none carried any trace of the virus. What they did find however, was that the spread of the virus seemed to be occurring around the most unlikely of places – the hospitals where patients were being treated.

When they learned that many of the victims in one village were pregnant women, who had been given regular vitamin shots by local nuns who were reusing infected needles (the five needles owned by the hospital were sterilized using boiling water at the end of each day), they recognized the method of transmission required close contact with bodily fluids.

On August 26, 1976, Scientists traced the chain of infected people back to the village of Yambuku and a single man, 44-yead-old Mabalo Lokela, a schoolmaster at the Mission School who appeared to be the first person (the “index case”) to die from the deadly virus. They began calling the virus the “Yambuku virus” and learned that shortly before his death, the schoolmaster had returned from the forest carrying a load of monkey and antelope carcasses. They had found their “patient zero” and proposed the likelihood that the deadly virus had jumped from the monkey population to humans (today it is believed the Ebola virus circulates in fruit bats, gorillas, monkeys, antelopes, and porcupines).

Not wishing to further stigmatize the Yambuku village, they pulled out a map and scanned the surrounding area. Noticing the nearby Ebola River, a tributary of the Congo River, that’s the name they chose for the virus whose first outbreak would eventually kill 88% of those infected.

Section of 1976 WHO report that describes the first Yambuku case

The following is a segment of the 1976 WHO report which documents the Ebola virus illness and death of patient zero (Mabalo Lokela).

The first known case, a 44-year-old male instructor at the Mission School, presented himself to the outpatient clinic at Yambuku Mission Hospital (YMH) on August 26, 1976 with a febrile illness thought to be malaria. This man had toured the Mobaye-Bongo zone in the northern Equator Region by automobile from August 10 to August 22 with six other Mission workers. The group visited some of the larger towns (Abumombazi, Yakoma, Katokoli, Wapinda) along the road from Yambuku to Badolite, but never arrived at that village because a bridge had been washed away a few kilometers east of the town.

On August 22, fresh and smoked antelope and monkey meat were purchased on the road about 50 kilometers north of Yambuku. The patient and his family ate stewed antelope on his return, but not monkey meat. He was given chloroquine by parenteral injection on August 26, 1976. His fever resolved rapidly, and he was afebrile until September 1 when he again had fever to 39.2 degrees C. Other symptoms and signs ensued, and he was admitted to Yambuku Mission Hospital on September 6 with gastrointestinal bleeding. He died on September 8, 1976.

After the description of patient zero, the report hints at another potential Ebola virus case that occurred within two days of the “patient zero” case.  In this instance, the identity of the victim led to an unusual discovery (and an interesting talking point for conspiracists).

… It was of interest, however, that a man about 30 y ears of age had been admitted to the medical ward [in Yambuku] on August 28, 1976, suffering from “dysentery and epistaxis”, a diagnosis not otherwise listed in the preceding eight months. This man, listed as a resident in Yandongi, the capital village of the collectivity some seven kilometers from Yambuku, was taken from the hospital [he died] two days later. He turned out to be a person completely unknown to the residents and authorities of Yandongi.