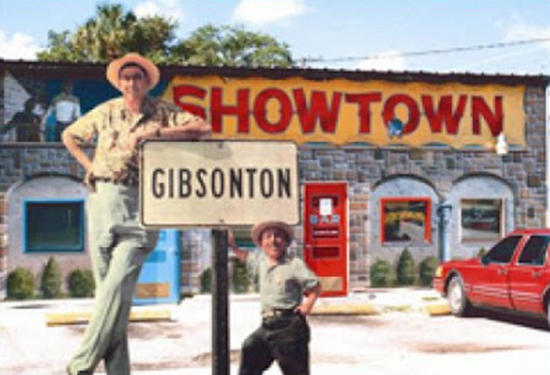 The migration of sideshow freaks to Gibsonton, Florida began in the 1936 after legendary carnival performers Al “the Giant” Tomiani (who stood 7’11” in his bare feet) and his wife, Jeanie the Half-Girl (she was only 2’1” tall) moved to waterfront property in Gibsonton to start a fishing business.

Located just 20 minutes south of Tampa, “Gibtown” looks like any other non-descript American town with a grocery store, gas station, and library. But if you travel deeper within its streets, you’re just as likely to run across elephants in a resident’s front yard or any number of legendary sideshow freaks who have made their home there for over 75 years.

The move to Freaktown USA

Soon after Al and Jeanie Tomaini, the “world’s freakiest couple”, settled in Gibsonton and started their fishing camp and restaurant business called Giant’s Fish Camp, other legendary carnies and sideshow freaks, strangers in every town they passed through, sought refuge there – a place where they could feel “normal”, not be treated like outcasts, and settle amongst others of their kind during the long winter months when the travelling sideshows shut down operations.  According to one local resident:

“We were a society apart from the places that we visited. We didn’t know anybody there, we went in there as strangers, we left as strangers, more or less, and we had to stick together in that respect.”

As more sideshow freaks settled in Gibsonton, the town embraced their kind and began enacting unique zoning laws to cater to the new resident’s distinctive needs. In Gibsonton, you can keep show animals, amusement rides, and carnival exhibits in your front yard. This of course, drew even more sideshow performers, including acrobats, contortionists, and carnival operators to the area. Its proximity to Ringling Brothers Circus headquarters in Tampa made it even more attractive to those in the sideshow business.

By the 1960’s, tired of battling an oft-mispronunciation of Gibsonton’s name, the town came to be affectionately known as “Gibtown” by the locals. In 1966, the International Independent Showmen’s Association (“Gibtown Showmen’s Club”), a non-profit organization made up of people in the outdoor amusement industry, opened in Gibsonton and with over 4,500 members, became the largest showmen’s association in the United States.

Over the years, Gibsonton has been home to many famous sideshow performers including Percilla the Monkey Girl, Edward Anato Hayes the Anatomical Wonder, Colonel Casper Balsam (who portrayed a Munchkin in The Wizard of Oz), Stanislaus Berent (aka “Sealo” or “The Human Seal”), Emmit Bejano the Alligator Man, and Grady Styles the Lobster Boy (who was also brutally murdered in Gibsonton in 1992).

By the 1980’s, unusual residents packed the city. Siamese twin sisters ran a fruit stand in Gibsonton for many years, famous illusionist Roy Huston opened a magic store there, Ward Hall (“King of the Sideshow World”) became a permanent resident, and Gibsonton had the only post office in the United States with a special shortened counter for dwarves.

Gibsonton, Florida, also known as “Showtown, U.S.A.”, is located just off U.S. Highway 41 about 15 miles southwest of Tampa and is probably the only place in America where your local police chief is a dwarf and your fire chief stands over 8 feet tall. Today a visit to Gibsonton will reveal broken-down pieces of carnival equipment (the more sideshow junk in your yard, the bigger your status in the community) and a colorful refuge of people who despite their unique appearances, live ordinary lives in an extraordinary town.