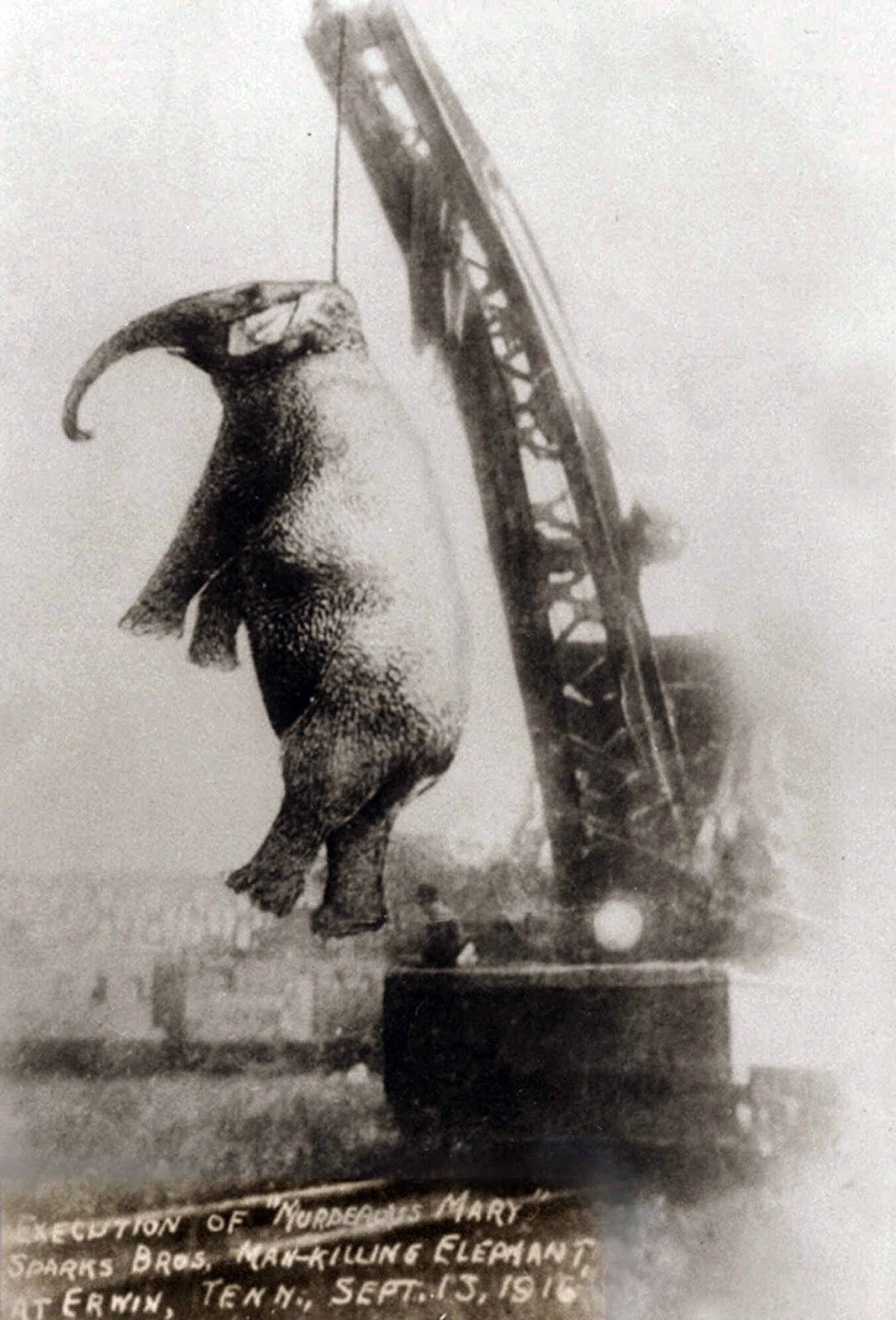 On September 11, 1916, Sparks World Famous Shows Big Top Circus arrived in St. Paul, Virginia, a tiny mining town nestled in the hills of Clinch River Valley. It was that same day that 38-year-old Walter “Red” Eldridge, a hotel janitor, was hired on the spot as an assistant elephant trainer.

Eldridge knew nothing about elephants but felt certain he could wield the hooked elephant stick that was required to keep the beasts in line. Besides, he was a drifter that had already roamed the country in a boxcar – a travelling circus-life with Sparks World Famous Shows would be right up his alley.

Sparks World Famous Shows was owned and operated by Charlie Sparks. It was a small travelling circus that only required ten railroad cars to move the circus about (in contrast to Barnum and Bailey which required eighty-four cars). As a distraction from World War I, which was raging in Europe at the time, the circus was popular in small (bored) towns who longed to see the circus’s performing sea lions, dogs, clowns, and five elephants – an especially popular attraction for the children.

The afternoon he was hired, Eldridge marched proudly in the circus parade alongside Big Mary, the star elephant. Mary was a five-ton Asian elephant that was billed as “the largest living animal on earth”. Sparks claimed she was three inches taller than Jumbo, P.T. Barnum’s famous pachyderm. Mary was a regular performer for Sparks World and could play musical horns with her trunk and bat baseballs out of the air with ease.

Eldridge – meet Mary and her wrath of fury

The day after Eldridge was hired, the circus moved on to Kingsport, Tennessee. After unpacking and setting up the equipment, Eldridge rode Mary to a nearby pond so she could drink and play in the water with the other elephants (note: conflicting accounts say what follows occurred during a parade). 19-year-old W.H. Coleman witnessed what happened next and says he recalls Eldridge prodding Mary with a hook behind her ear after she stopped and reached down to feed on a discarded watermelon rind. Unknown to Eldridge, Mary had an abscessed tooth and he inadvertently hit the tender spot. Mary went into a rage.

Using her trunk, Mary snatched Eldridge off her back, lifted him high into the air, then threw him into a nearby drink stand. She then walked to him, placed her foot on his head, and crushed it. In Coleman’s own words:

“There was a big ditch at that time, run up through Center Street, …And they’d sent these boys to ride the elephants… There was, oh, I don’t know now, seven or eight elephants… and they went down to water them and on the way back each boy had a little stick-like, that was a spear or a hook in the end of it… And this big old elephant reaches over to get her a watermelon rind, about half a watermelon somebody eat and just laid it down there; ‘n she did, the boy give him a jerk. She pulled him away from ’em, and he just blowed real big, and when he did, she took him right around the waist… and throwed him against the side of the drink stand and he just knocked the whole side out of it. I guess it killed him, but when he hit the ground the elephant just walked over and set her foot on his head… and blood and brains and stuff just squirted all over the street.”

Witnesses say Mary calmed down immediately after killing Eldridge but regardless, panicked onlookers began shouting, “Kill the elephant! Let’s kill the elephant!” A local blacksmith, Hench Cox, shot Mary five times with a small-caliber rifle but did little harm to Mary who seemed to barely even notice she’d been shot. Sheriff Gallahan responded and “knocked chips out of her hide a little” with his .45 pistol but it quickly became apparent that no gun in the county was going to bring Mary down.

Meanwhile, areas around Tennessee threatened to boycott the show if Mary was allowed to perform. Others went further and demanded Murderous Mary be put to death. An upcoming stop for the show, Johnson City, had just passed an ordinance banning circuses within the city limits. Sparks knew city officials were just itching for a reason to ban travelling shows altogether. Fearing the incident could ruin his circus, Sparks agreed to kill the rogue elephant.

The question of how to kill a five-ton elephant had never been considered before. Thomas Edison had recently electrocuted an elephant to death in an attempt to demonstrate the dangers of the competing AC electricity standard. But Tennesseans had no means to generate and distribute the amount of electricity they felt would be needed to put Mary down.

Alternative methods were discussed including tying Mary to two railroad cars and tearing her apart and alternatively, crushing her between two railroad cars. Alas, all options were deemed too cruel. They eventually settled on hanging. It was decided that Murderous Mary would be hung the next day in Ervin, Tennessee, where the circus had their next scheduled performance.

On September 13, 1916, Mary was placed aboard a train and sent to Ervin, Tennessee, about forty miles away from Kingsport. The circus performed in Ervin that day – but not Mary, who remained outside the performance tent, chained to a pole. Witnesses say she spent the entire day swaying nervously while the other elephants performed inside the Big Top.

After the show, Mary was marched down Love Street with the other elephants, trunk to tail, to the Clinchfield Railroad yard.  It was raining that day but still, a crowd of over 2,500 people gathered to watch the execution (admission was free). One child recalls,

“We kids hung back because we were scared to death – but we still wanted to see it.”

When they arrived at the railyard, Mary’s leg was chained to a rail and the other elephants driven behind a roadhouse. A 7/8-inch chain was wrapped around Mary’s neck and tethered to the 100-ton railway-mounted crane that was bolted to Derrick Car 1400 (the crane was used to lift carriage cars on and off the tracks). The winch was turned on and Mary was slowly lifted off the ground by her neck. Wade Ambrose, who was 20 years old at the time, remembers the day clearly.

“They had a time getting the chain around her neck. Then they hooked the boom to the neck chain, and when they began to lift her up, I heard the bones and ligaments cracking in her foot. They finally discovered that she’d not been released from the rail, so they did that.”

Mary struggled a bit but after being raised only a few feet off the ground, the chain broke. Mary fell to the ground, breaking her hip.

“It made a right smart little racket when the elephant hit the ground.”

Onlookers panicked and took off in all directions, but Mary simply sat there, dazed and in terrible pain.

Mary the performing elephant is hanged

The chain was replaced with a heavier one and once again, the 100-ton crane lifted Mary from the ground, high into the air. This time she died.

Mary was left hanging for 30 minutes and an iconic photograph captured the event. She was then buried along the tracks near where she was hung (“about 400 feet up the tracks”). The photograph of the hanging sparked outrage and the event became a cautionary tale of circus animal abuse.