The Athens Mental Health Center, in Athens County, is located on a hill across from the Hocking River in Ohio. It opened in January 9, 1874 on land purchased from a local farmer named Coates. In recent years, the State Hospital campus also known as ‘The Ridges”, has been absorbed into the Ohio University campus and now houses several of the University buildings. Clearly, lots of changes have taken place on this plot of land, but there still exists some original remnants of the old institution – and they are not wholly physical remnants…

Many years ago, mental institutions were considered peculiar places. The Athens Mental Health Center was one of those places. Years ago it was used to house the criminally insane, patients that were written off as useless to society with no hope of recovery. Various stories circulated of atrocities that occurred within its walls. Beatings, tortures, and other cruel forms of punishment were the norm for its day. There have even been many reports of deaths and murders occurring within the facility’s walls.

The history of Athens Mental Hospital

The institution was closed in the 1980’s during the time when the Reagan administration shuttered many of the state’s hospitals in order to realize budget savings. Many of the inmates were simply released on the streets and now account for much of Athens’s relatively large homeless population. Ohio University acquired most of the institution’s campus and many of the buildings have been or are being refurbished to be used as administration buildings. Several of the buildings are open to the public where interested parties can take guided tours and hear of the atrocities and appalling treatment the hospital’s inmates were forced to endure.  One of the more popular stories provides tourists with a vivid and grim reminder of how important a ‘normal’ functioning mind can be.

The case of inmate Margaret Schilling

Shortly before the institution closed, an inmate by the name Margaret Schilling, mysteriously disappeared from the campus. The January 12, 1979 issue of the Athens Post ran a story on the incident and calmly asked the public for any assistance they could provide. A search party was assembled but no trace of Marge could  be found. The center then subsequently closed and the episode was quietly forgotten. A few weeks later, a maintenance man named Clarence Allison was working in Ward N.20 when he made a shocking discovery in the attic of the facility.  Marge’s body, which had been decaying for 5 weeks, was found sprawled on the floor. The authorities surmised that Marge had hidden herself in the attic of the building. Demented and unable to care for herself, Marge had simply died of starvation in the very spot she chose to hide.

After removing the body, the officials were surprised to find a clear, dark outline of her body superimposed on the floor. The outline revealed many details. The folds and wrinkles of her clothes and even the style of hair she wore at death were clearly visible. The stain was cleaned by maintenance workers but reappeared after a day or two. After many more attempted cleanings it was apparent that the stain was not going to go away. Scientists that have examined the mysterious stain, have reasoned that the stain was caused by the decomposition of her body, an occurrence not entirely unheard of. Today, the stain on the marble floor is still unmistakably visible and is a peripheral point of the campus tours.

Cemeteries in the area

Another popular focal point of the facility is one of the campus’s notorious cemeteries. Located on the edge of the grounds, the cemetery still remains as a grim reminder of the institution’s earlier dark days. With rows and rows of perfectly aligned graves, the innocuous inmates were not even provided the dignity of a marked grave.  Each plot contains a small stone engraved with nothing more than the resident’s assigned patient number.  In one area of the cemetery, amongst the perfectly straight rows of unmarked graves, is a circular arrangement of headstones. Nobody is sure why the graves were arranged in this manner, as there is nothing apparently unique about the graves. What is known though, is that this particular spot is a favorite meeting place for witch havens and other alternative religions that are located in the nearby area. 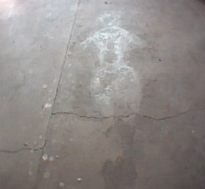 There area around the campus boasts several more cemeteries that have gained notoriety as centerpieces of paranormal activity.  In fact, the British Society for Psychical Research rates the Hannings Cemetery as the 13th most haunted place in the world. Area residents are quite familiar with the many reports of strange noises, ghostly apparitions, and odd disappearances that have occurred in and around the Hannings cemetery. The most talked about and most frequent Hannings Cemetery sighting is of an old man, wearing a hooded robe, who chases people out of the cemetery with his sickle.

Simms Cemetery, also listed as one of the top haunted places on Earth by the British Society for Psychical Research, is where you’ll find the Hanging Tree. The cemetery was named after John Simms, a local official known for his many merciless trials and hangings during the 1800’s. The tree still stands and the rope scars are still quite visible to anyone brave enough to enter the immediate area surrounding the tree.

West State Cemetery, currently unused, also provides a large number of ghostly reports.  Containing many unmarked graves, the resting places of fallen soldiers, and even a few infamous killers, the cemetery contains an odd piece of art called the Angel Statue. The statue, placed there to commemorate the fallen soldiers buried on the grounds, has been reported by many to suddenly flap its wings and to occasionally weep real tears.

The surrounding cemeteries provided much fodder for paranormal researchers and it wasn’t long before they noticed something odd about their arrangement. The five area cemeteries, if viewed on a map, form the perfect shape of a pentagram with Wilson Hall, another building located on the Athens campus, lying perfectly centered in the middle of the geometric arrangement.  Wilson Hall, located on the West Green, was first opened in 1964.  Most new students are quickly warned that Wilson Hall is reputed to be haunted.  In fact, one room, room 428, is closed and permanently sealed due to the number of unusual sightings that have been reported there.  Students tell stories of objects flying off of shelves and smashing into the walls, doors mysteriously opening and closing, toilets flushing, tables and chairs bouncing off the floors, and the appearance of the ghost of a student who died violently in the room. The student, deeply involved in the occult, was killed (or committed suicide) in the room during the early 1970’s.  It was said that the student practiced astral projection, a method where the human spirit separates from the body and travels on its own.  There were also rumors that she often dabbled in sorcery and made various attempts to contact the dead

Is Wilson Hall an area of psychic energy?

Spiritualists have claimed that the geography of the Athens area, the layout of the mountains, peaks, and valleys, makes it extremely conducive to psychic energy. In the early 1980’s, while researching a illuminating article about the Mental Institute, the Athens Post did a routine examination of the property records for the institute.  They were astonished to discover that Wilson Hall had been built on the exact same location as the original site of an earlier graveyard used by the Athens Mental Institute.

In 2011, the horror mockumentery Grave Encounters was released and featured fictional camcorder footage from a mental institution named Collingwood Psychiatric Hospital.  The mental institution featured in the movie is somewhat of a secret but rumors are that at least parts of the movie, if not all, were based on the haunted Athens Mental Hospital.