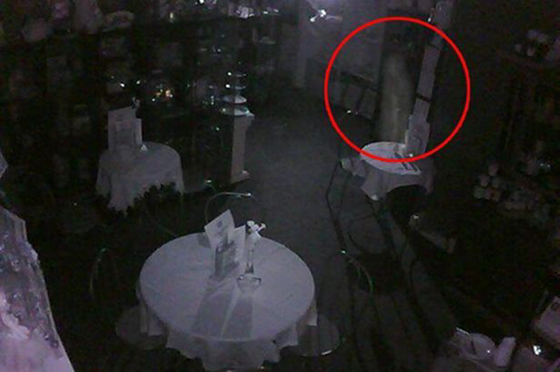 Dan Clifford says he was reviewing the security footage taken from the CCTVs in his local café when he noticed a ghostly female figure hovering over one of the tables before vanishing into thin air.  According to Dan, the security cameras are set to turn on automatically when motion triggers them.  The film segment in question was taken during the middle of the night, at which time the business was closed, and the doors locked.

Dan explained that his café, the Curiositeaz Vintage Tea Room in Perth, Scotland, has produced other unexplained phenomena.  Workers complain of hearing ghostly voices while others have witnessed chairs being pushed across the room.  Some employees have reported being physically shoved in the back by an invisible entity. Clifford noted that he has even had mediums stop in the café because they felt something strange when they passed by his business.

“The first time I saw the shadow moving on the camera my heart went nuts. I thought there was an intruder in the shop. But when I looked closer, I realized it couldn’t be a live human being – I could see right through it.”

A spokesman for Paranormal Investigation Scotland said: “This is the most convincing image we have seen in almost a decade, so we were keen to start looking into it.” The experts will return to the cafe next month, with some of Scotland’s best-known mediums in tow, in an attempt to capture more footage of the Perth Cafe Ghost.