On November 29, 1989, Belgium citizens, including several large groups of people and three groups of police officers, reported seeing a large triangular shaped craft flying at low altitude over the Belgium countryside. The reported UAP (Unidentified Aerial Phenomena) was flat with bright lights underneath that changed colors (red, green, and yellow). The object flew low to the ground without making a sound. Cross checking the various reports revealed that the object travelled from the town of Liege towards the borders of Germany and the Netherlands. Before the night was over, the object would be sighted by over 1,500 people on the ground resulting in seventy different police reports and would trigger a military response from the Belgium military.

At 5:15 PM, two federal police officers were patrolling near the German border when they noticed a brightly lit field near the road. Turning their attention to the unusually bright grassland, the saw that hovering just above the ground was a triangular shaped craft with a red light located in the center and three beams of blinding light shining down onto the field. The officers noted that the light was so bright, it lit the inside of their patrol vehicle. They noted that object made no sound as it moved. At the same time, the UAP was spotted by thirty more civilians during a thirty minute period. Some witnesses stated that the object emitted red balls of light towards the ground which would near the ground and then change direction and return quickly to the craft.

At 6:45 PM, the policemen saw a second, smaller craft. The smaller craft tilted when changing direction giving the officers a view of the top part of the UAP. The officers noted that it had a dome like, windowed structure on top. The second craft disappeared behind a line of trees and the officers lost sight of it (but attempted to give chase).

The UAP sightings continue and things heat up

At 11:00 PM on March 30, 1990, reports of three unusual lights travelling southeast of Brussels were received by the Control Reporting Center (CRC), Belgium’s military air defense command center. As the craft trekked across the sky, ground radar stations were able to note the presence of the object on their radar screens. The CRC contacted nearby radar facilities who confirmed that they were seeing the object on their radar screens too.

Approximately 10 minutes later, a second set of disjointed lights was sighted moving towards the first object. By 11:30 PM, witnesses noted that the second set of lights had shifted together to form a triangular shape. Visual sightings combined with radar confirmation prompted a response. Two F-16s were scrambled to intercept the first craft. As they neared the craft, they were able to obtain a radar lock on the object but would lose the lock when the targets quickly changed position. They estimate the objects were travelling over 1,000 miles per hour (no sonic boom was ever heard when the object surpassed the sound barrier) while dropping and climbing from near ground level to 11,000 feet in mere seconds. Despite all attempts, the pilots were unable to make visual contact even as thousands on the ground watched the objects skirt about in the sky. After a two hour unsuccessful chase, low fuel dictated the F-16s return to their base. Upon landing, pilots and ground personnel could see the objects on the horizon.

The Belgian UFO wave continued for several more months. Over 30 groups of people reported sightings plus three groups of police officers (totaling 13 policemen) including a sighting by the Belgian national police Captain. 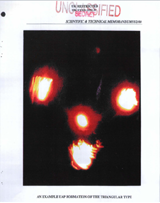 On April 4, 1990, a photo of the object was captured that has become a classic UFO photograph. At 10:00 PM in the town of Petit-Rechain, a woman walking her dog noticed a craft hovering over her home. She ran into the house and told her husband what she had seen. Her husband rushed outside with his newly purchased camera. With only two shots remaining on the film roll, he stabilized himself against a wall and snapped two pictures with an estimated 1-2 second exposure time for each shot. After developing the film, the man showed the picture to a few close friends and then put the photo in a drawer. Months later the military learned of the photo and copies were obtained for analysis. They determined that the photo was not doctored and that the camera had been held stationary while the object was moving slowly and banking at a 45 degree turn. The photo was examined again in 2002. Using more sophisticated technology, researchers confirmed the previous findings but in addition, found that the object produced some sort of physical halo around it.

On July 26, 1990, at 10:35 PM, a husband and wife were driving when they noticed an object hovering silently in the sky. Described as an equilateral triangle with three spotlights shining towards the ground, the object hovered ahead of them. On a whim, the husband flashed his car lights at the object three times. At that moment, two of the lights rotated towards their car and flashed three times in succession. The object then moved towards the vehicle and positioned itself about 100 yards from the car and began following them. The object maintained the same speed as the vehicle (about 50 miles per hour) and followed them for several minutes. Finally, the object pulled next to the car, then banked over a river and climbed rapidly out of sight.

The sightings began again in March 1991. On March 12, 1991, a total of twenty-seven reports were filed from the city of Liege including a sighting of the craft above a nuclear plant.

Belgian military officials confirmed that no F-117 stealth fighters were flown in the area during the sightings. Detractors have attempted to explain the sightings as helicopters despite witness testimony that the craft made no sound. The Belgian military has classified the objects as “unidentified”.