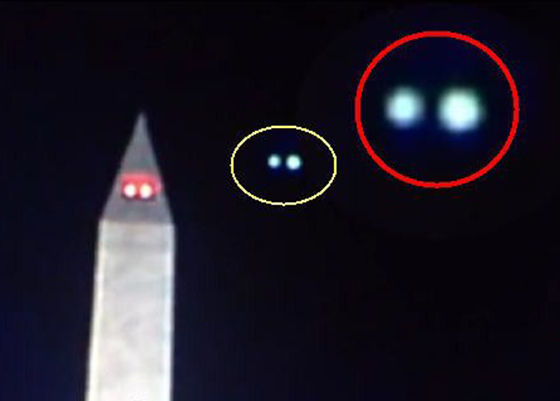 Fox News was covering the Sunday Presidential Inauguration on 1/21/13 when they began to wrap up and break away for a commercial.  As they broke away for the commercial, a viewer, using an iPhone, was filming the DVR recording when he noticed two, glowing blue orb-like lights materialized into view and then “dissolve” into smoke before fading away.  UFOlogists claim camera reflection can be ruled out because thankfully, the viewer rewound the recording and rolled the segment again giving us two opportunities to view the strange lights.

It certainly doesn’t look or behave like any known U.S. aircraft, particularly not like surveillance drones which, presumably, would be flying all over Washington in anticipation of the coming inaugural ceremonies.

Ufologists are claiming that the object could be a UFO that “de-cloaked” while being filmed.  Detractors are waiting to see if another copy of the Fox News segment emerges. Check the video from the Fox News broadcast below and decide for yourself – drone, UFO, light aberration, or hoax?

This isn’t the first time UFO’s have been spotted over Washington (see UFO’s over Washington) nor even the first time they’ve been spotted around an Obama event.  On November 1, 2008, multiple reports arrived from witnesses in Pueblo, Colorado about a gray disc-shaped UFO flying past Obama’s campaign stage.  Two months later, on January 20, 2009, as Obama was giving his first inauguration speech, a gray disc-shaped object again shot past the Washington monument (CNN reporters noticed and later mentioned the object – check video segment here) and on December 9, 2009, as President Obama was accepting the Nobel Peace Prize in Norway, a large blue spiral-shaped object was witnessed by thousands of onlookers.