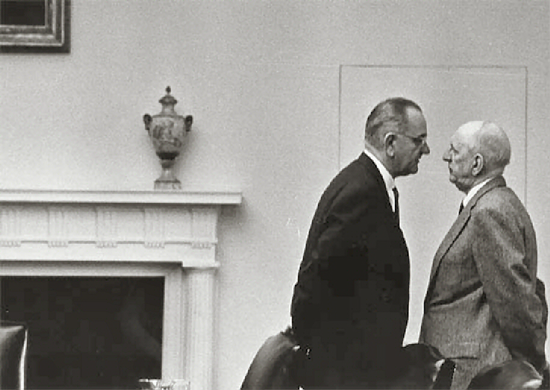 By 1955, Senator Richard Russell had become one of the most powerful and influential U.S. Senators in modern history. After serving as Governor of Georgia, Russell served for almost 40 years in the United States Senate during which time he was a candidate for President of the United States in the 1948 Democratic National Convention, and the 1952 Democratic National Convention. He was chairman of the Armed Services Committee from 1951 through 1969 and at the time of his death, was the most senior member of the Senate.  His credibility as a witness is beyond question. That’s what makes his report of a disc-shaped UFO all the more interesting.

In 1955, Senator Russell was dispatched to Russian on a fact-finding mission. It was during this trip, just after 7:00 PM on October 4, 1955, while traveling on a Soviet train, that Senator Russell witnessed a disc-shaped UFO taking off near the railroad tracks.

Russell’s report, which was declassified 30 years after the fact (it was filed as “Top Secret”), describes how Russell called his military aid and interpreter to the window where all three witnessed the object, plus another one that appeared a minute later.

“I doubt if you’re going to believe this, but we all saw it. Senator Russell was the first to see this flying disc…we’ve been told for years that there isn’t such a thing, but all of us saw it… One disc ascended almost vertically, at a relatively slow speed, with its outer surface revolving slowly to the right, to an altitude of about 6000 feet, where its speed then increased sharply as it headed north. The second flying disc was seen performing the same actions about one minute later. The take-off area was about 1-2 miles south of the rail line…”

The three witnesses watched as the flying disk rose and flew northward over the train, out of sight.

The CIA later interviewed Senator Russell, his military aid Col E.U. Hathaway, his interpreter Ruben Efron, and a “fourth person” (name was redacted in the document) about the sighting. The witnesses described the object as disc-shaped with a dome on top and noted that the object made no sound as it ascended. They noted that the edge of the disk glowed pinkish white with a revolving outer rim that rotated slowly in a clockwise direction. The witnesses pointed out that visibility was excellent.

Strangely, the senator’s report was never filed in Project Blue Book documents. His report was only declassified in 1985.