Iran has taken the wraps of their new Qaher-313, a “super modern fighter plane” but rather than oohs and aahhs, they’re getting some rather puzzled reactions from the U.S.  In fact, many are laughing about it.  The plane appears to be a joke of some sort and by all appearances, is likely unable to even fly.  Check the photos below for a complete explanation.

Firstly, modern stealth airplanes must have amazingly smooth surfaces or the aerodynamics simply won’t work.  It’s pretty obvious from these pictures that the surface of Iran’s Qaher-313 is rough, bumpy, and appears to even be made of plastic.

Engineers are saying the plane is too small to support any type of aircraft engine.

The cap over the engine exhaust appears to have no engine nozzle.  Engineers say without this, the plane will simply melt or explode.  Again, note the rough surface and plastic appearance.

Modern aircraft employ as many smooth, non-angular surfaces as possible.  The original stealth fighter used many angular surfaces, enough to throw off its aerodynamics, and is unable to fly without computer assistance.  This plane looks like it was cut by a jeweler.

Optics on airplane canopies are notoriously well-built and crystal clear.  Note the scratches and smudges on this canopy seem to indicate the pilot would be unable to see enough to taxi off the runway. 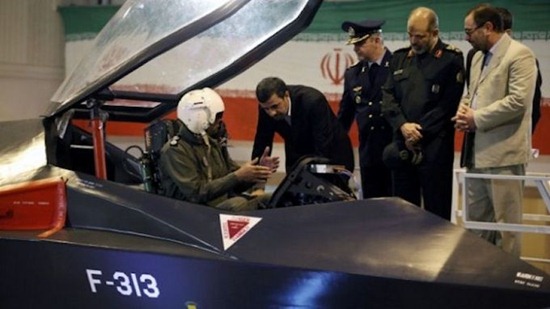 For real?  This is the cockpit?  It appears to have commercial parts plugged in and a standard car stereo for the main display.  No HUD is appearant either.

But Iranian president Mahmoud Ahmadinejad seems to like it (below he appears to be reading the instruction manual) .  He said:

“This new fighter jet is a bomberand. It is fully engineered by Iranian scientists and has exceptional features.  This fighter is one of the most sophisticated fighter jets in the world, and we just talk [sic] to its test pilot, and he expressed great satisfaction for the flight performance as a professional pilot.”

It is widely speculated that the airplane that Iran introduced to the world is nothing more than a mockup, quite likely one created without using any computer-aided design facilities.