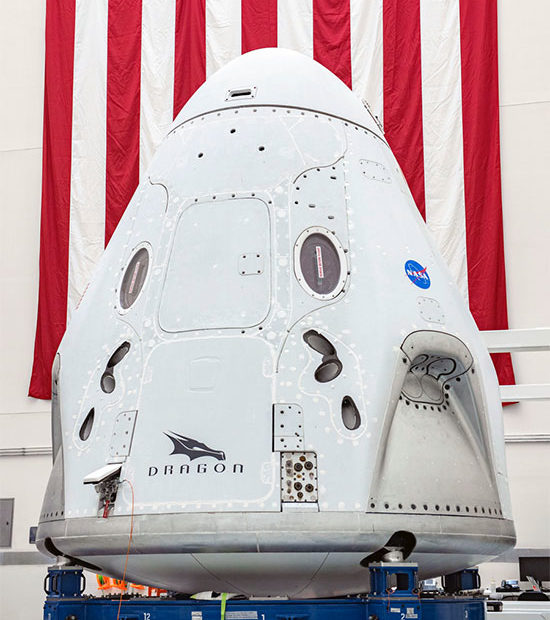 It’s going to be a historic event – Wednesday’s launch of a rocket that marks the groundbreaking public-private partnership between the United States and SpaceX. And since we’ve suffered a disappointingly long wait after NASA retired the space shuttle fleet in 2001, well, it’s about time.

This week’s mission, formally called SpaceX Demo-2, will launch at 4:33 PM from the Kennedy Space Center at Cape Canaveral, Florida. Astronauts Bob Behnken and Doug Hurley will be carried to the International Space Station (ISS) where they’ll hang out for 2-3 months evaluating SpaceX’s new spaceship.

And not one to miss out on free promo, both astronauts will catch a ride to the launchpad in Elon’s Tesla electric car.

Behnken will be the joint operations commander for the mission, responsible for activities such as rendezvous, docking and undocking, as well as Demo-2 activities while the spacecraft is docked to the space station. He was selected as a NASA astronaut in 2000 and has completed two space shuttle flights. Behnken flew STS-123 in March 2008 and STS-130 in February 2010, and he performed three spacewalks during each mission. Born in St. Anne, Missouri, he has bachelor’s degrees in physics and mechanical engineering from Washington University and earned a master’s and doctorate in mechanical engineering from California Institute of Technology. Before joining NASA, Behnken was a flight test engineer with the U.S. Air Force.

Hurley will be the spacecraft commander for Demo-2, responsible for activities such as launch, landing and recovery. He was selected as an astronaut in 2000 and has completed two spaceflights. Hurley served as pilot and lead robotics operator for both STS‐127 in July 2009 and STS‐135, the final space shuttle mission, in July 2011. The New York native was born in Endicott but considers Apalachin his hometown. He holds a Bachelor of Science degree in Civil Engineering from Tulane University in Louisiana and graduated from the U.S. Naval Test Pilot School in Maryland. Before joining NASA, he was a fighter pilot and test pilot in the U.S. Marine Corps.

Dragon 2 is a class of reusable spacecraft developed and manufactured by American aerospace manufacturer SpaceX as the successor to the Dragon 1 cargo spacecraft. The spacecraft launches atop a Falcon 9 Block 5 rocket and returns to Earth via an ocean splashdown. Unlike its predecessor, the spacecraft can dock itself to the ISS instead of being berthed. It has two variants; Crew Dragon, a human-rated capsule capable of ferrying up to seven astronauts, and Cargo Dragon, an updated replacement for the original Dragon spacecraft. As of March 2020, four Dragon 2 spacecraft have been manufactured.

Lifting off from Launch Pad 39A atop a specially instrumented Falcon 9 Block 5 rocket, Crew Dragon will accelerate its two passengers to approximately 17,000 mph and put it on an intercept course with the International Space Station. Once in orbit, the crew and SpaceX mission control will verify the spacecraft is performing as intended by testing the environmental control system, the displays and control system and the maneuvering thrusters, among other things. In about 24 hours, Crew Dragon will be in position to rendezvous and dock with the space station. The spacecraft is designed to do this autonomously but astronauts aboard the spacecraft and the station will be diligently monitoring approach and docking and can take control of the spacecraft if necessary.

Falcon 9 Block 5 is a two-stage-to-orbit medium lift launch vehicle designed and manufactured by SpaceX in the United States. It is the fifth version of Falcon 9 Full Thrust. It is powered by Merlin engines, also developed by SpaceX, burning liquid oxygen (LOX) and rocket-grade kerosene (RP-1) propellants.

The SpaceX Merlin is a family of rocket engines developed by SpaceX for use on its Falcon 1, Falcon 9 and Falcon Heavy launch vehicles. Merlin engines use RP-1 and liquid oxygen as rocket propellants in a gas-generator power cycle. The Merlin engine was originally designed for sea recovery and reuse. The injector at the heart of Merlin is of the pintle type that was first used in the Apollo Lunar Module landing engine (LMDE). Propellants are fed via a single shaft, dual impeller turbopump. The turbopump also provides high-pressure fluid for the hydraulic actuators, which then recycles into the low-pressure inlet. This eliminates the need for a separate hydraulic drive system and means that thrust vectoring control failure by running out of hydraulic fluid is not possible.