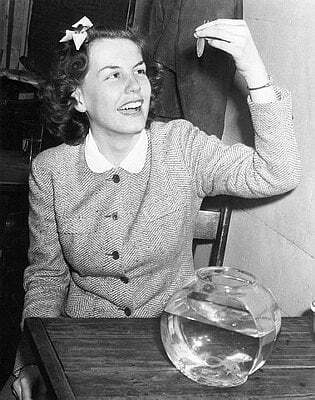 It began in the 1930’s, a fad so bizarre; some mistakenly believe it to be an urban legend. Goldfish swallowing, where a live goldfish is swallowed, started in mid 1939 and sizzled out a few months later. Despite its short life, the fad secured a firm spot in American’s history of bizarre fads.

Few fads can be traced back to one person, but the origination of goldfish swallowing is well documented. It began with a single man.

In a 1963 letter to the New York Times, Lothrop explained that the fad began in late 1938 when, he, Lothrop Withington Jr., a then Harvard freshman, was encouraged by his “campaign managers” to swallow a live goldfish as a publicity stunt in his bid for class president. Withington, son of a Boston lawyer and Harvard’s 1919 football captain, had boasted that he had once eaten a live goldfish in front of a crowd at Holworthy Hall. A fellow student offered to pay Lothrop $10 to do the stunt again. Lothrop agreed and a date for the stunt was set.

On March 3, 1939, the dining hall of the Freshmen Union was crowded with spectators waiting to see this unusual sight. People started taking pictures while Lothrop plucked a wiggling three-inch fish from its bowl, leaned backwards, and lowered the fish into his mouth. He chewed the fish a few times and then swallowed hard. Afterwards, he took a toothbrush out of his pocket to clean his teeth and remarked “the scales caught a bit on my throat as it went down.”

Other Colleges Join in on the Goldfish Swallowing Fad

With the inadvertent media exposure, news of Withington swallowing a live goldfish had spread like wildfire to other colleges, including Franklin and Marshall College in Lancaster, Pennsylvania. Just three weeks later Frank Hope Jr. outdid the Harvard man by swallowing three goldfish while declaring Lothrop a sissy. Frank opted to salt and pepper the goldfish and swallow them without chewing.

Frank Hope’s record was shattered within twenty-four hours, when another Franklin and Marshall student, George Raab, swallowed six fish the very next day. With three schools now battling for goldfish swallowing supremacy, Irving Clark Jr., a Harvard student, took up the school mantle and pride by swallowing two dozen goldfish, plus raised the ante by promising to eat any bug for a nickel, an angleworm for a dime, and even a beetle for only two bits (one quarter).

After a week of competition between these two schools, other colleges joined the competition. A student from the University of Pennsylvania, Gilbert Hollandersky, downed twenty-five goldfish and then quickly rid the taste from his mouth with a steak dinner. Almost every day a new record was reported. Julius Aisner from the University of Michigan was able to swallow twenty-nine but Michael Bonner, the Albright College football captain, ate thirty-three. Albert Hayes, of MIT, powered through by gobbling forty-two fish.

Soon, publicity seeking students began performing the stunt in front of crowds. Jack Smookler of Northeastern University swallowed thirty-eight in front of a small crowd on the university campus. A veterinary student at Middlesex University, Gordon Southworth, stomached sixty-seven in just fourteen minutes while standing next to a Soldier’s Monument in Waltham Common. A record that seemed it was going to last was made by Clark University’s Joseph Deliberato. He swallowed eighty-nine goldfish at one sitting in early April.

Marie Hansen of the University of Missouri was the first female student to swallow a live goldfish. But a co-ed student at Boston University, Betty Hines, became known that spring because of the goldfish sugar cookies she had created.

Tiring of the nonsense, Massachusetts state legislature introduced a bill that would “preserve the fish from cruel and wanton consumption.” The president of the Boston’s Animal League made sure that goldfish swallowers would be arrested if campus officials did not stop this behavior. Health concerns also rose when a pathologist at the U.S. Public Health Service said that goldfish may contain tapeworms or harbor a disease that causes the swallower to become anemic.

In the decades that followed, every so often, someone would decide to test their mettle. By 1970, the record of goldfish gluttony had gone beyond three hundred.