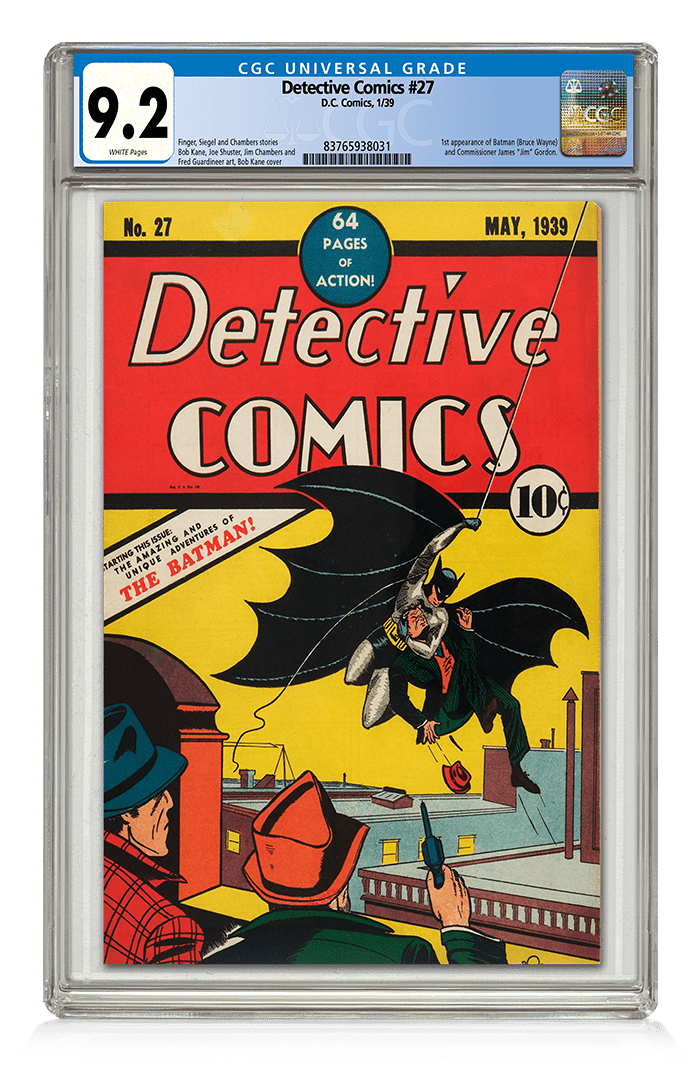 A comic book grading scale is used to grade comics using a wide variety of factors including evidence of rat or mouse chews, staple rust, mothball smells, and even fingerprints. Grading also involves some unusual terms such as “cockling” and “foxing”. Here’s the inside scoop on how comic books are assessed, rated, and graded using a comic book grading scale.

The ONE Grading System

The difference in certified and uncertified comic books

Comic books can be professionally certified by a 3rd party grading company such as GCG. For a fee, the company will asses and grade your comic book (using their own comic book grading scale), verify any autographs, and place them in sealed protective cases. Certified comic books are known as “graded” or “slabbed” comics.

Uncertified comic books are more common and are graded by the comic book owner themselves. These are known as “ungraded” or “raw” comics. There is nothing wrong with grading your own comic book since the cost of a professional grading service may exceed the value of the comic book itself.

When grading a comic book, look for these common defects and flaws. Subtract 1/10 of a point for each flaw found – subtract more if the flaw is severe.

Look for reduced color saturation to only parts of the comic’s color.

Fading is a specific type of color loss. Look for fading due to sun damage or reduced color saturation of the entire comic book cover.

Color breaks are another type of Color Loss but localized to a specific part of the cover. Color breaks interrupt the color changes on a comic book cover. For instance, white lines caused by creases are a type of color break.

Look for flakes in the paper greater than 1mm in diameter. The white paper beneath the color will be visible where the flake was removed.

Look for flakes in the color less than or equal to 1mm in diameter. The white paper beneath the color will be visible where the fleck was removed.

Look for yellowing of the comic book pages due to age (and overexposure to moisture and oxidation). A gauge such as The OWL Card can be used to determine the degree of yellowing.

Look for bacterial or fungal damage to the paper. This typically appears as discolored orange-brown splotches or spotting.

Look for missing pages or pages that have been torn. This type of damage can be broken down further as follows.

Missing Centerfold: the stapled, four-page middle sheet of the comic is missing.

Missing Coupon: A coupon has been clipped or cut from the comic book.

Removed or Lost Pages: Pages that have been detached or are missing entirely.

Chip Cut: A piece of page smaller than 1 square millimeter is missing.

Glasses Detached or Missing: The red/green cellophane 3D glasses are not attached to the comic book.

No Cover: The entire cover is missing.

Look for rust stains around the page staples.

Look for chips at the top, bottom, and right edges of the cover. Determine how brittle interior pages are when handled.

Look for loss of paper due to tape being pulled, scuffing or abrasion, or chemical reactions.

A stripped cover is a cover missing 1/2 to 1/3 of its cover page, typically the top part of the cover. In the early days, retailers were allowed to “strip” covers and mail back the strip for credit on unsold copies. Most retailers broke the law and resold the comic book that was supposed to be destroyed.

Look for holes or splits in pages caused by the comic being pulled apart.

Look for light abrasions that may not have damaged the color but have interrupted the surface gloss of the comic book.

Look for spine stress. This shows as a small fold or crease perpendicular to the comic book’s spine.

Look for dips, curves, or bowing on the cover along the spine that indicates the comic has been improperly stored.

Look for separation at the spine fold, usually around the staple.

Look for horizontal rips in the comic book’s cover that can be seen on both the front and the back.

Look for bends along the spine (results from mishandling the comic book).

Look for dented or dull corners of the comic book cover and pages.

Look for corner areas that are rough.

Look for any heavy folds in the paper that cause a crease.

Look for indentations in the paper that make the surface uneven. Extensive denting can be caused by water damage.

Look for dark stripes on the edges that indicate the comic book has been exposed to dusty conditions for some time or has suffered from prolonged exposure to light.

Look for nicks and missing pieces that hint the comic was damaged by gnawing rats.

Look for dirt or soiled covers and pages.

Look for damage that is not due to normal wear and tear. This type of damage varies widely but is typically due to careless handling or storage of the comic book. Here are a few examples.

Look for residue where cellophane tape has been removed.

Look for unusual smells such as mothball smell.

Look for eraser marks that dull or completely remove color from a page or cover.

Non-collectors will sometimes punch holes into comic books for binding in a three-ring binder. Although great for storage and use, it severely impacts the comic book’s value.

Look for extraneous non-production writing or drawing on the comic.

Look for signs of water damage including staining or swollen paper.

Look for a store name, address, or date stamped in ink via a rubber stamp or stamp pad.

Although not the fault of the buyer, production and shipping issues are considered defects and impact the value of a comic book and lower its comic book grading scale score. Look for the following issues.

Look for creases down the center of the comic that could be caused by the comic being folded for mailing.

Look for an extra cover stapled on during manufacturing.

Look for bubbling on the cover (a printing defect).

Look for pages that are not properly separated along their right edges.

Look for streaks or blank spots where ink was not properly applied during printing.

Look for spines and staples not properly placed or centered causing part of the back cover to be visible from the front (or vice-versa).

Pages out of Order

Look for pages that were bound in the wrong order.

Restoration work improves the value but still detracts from the overall value of a comic book and lowers its comic book grading scale score. Look for evidence of cleaning, color touch-ups, and pages that have been trimmed to make them sharper. Determine if the cover has been reattached using glue.

Note that a Non-Original Cover automatically gives the comic a No Grade (NG).

Damage that is not considered a defect

Not all damage is necessarily a defect. The following of often miscategorized as a defect.

Distributor stripes are blue, green, red, or yellow 1″ wide stripes found along the top edge of the comic book. They are color codes used by the distributor for more efficient distribution. They are not considered a defect.

Pressing is the process of dry pressing the comic book to remove dents, folds, and dimples. It does not devalue the comic book in any way and in fact, typically improves the comic’s value.

Some comics may have tiny perforations in the page margins that were remnants of the manufacturing process. These produce the satisfying “clicks” heard when a page is first pulled apart. They are not considered defects and in fact, may prove that a comic book has been unread, which of course raises its comic book grading scale score.

Print can sometimes be seen on the reverse side of the page or cover (particularly common with white covers). This print through is not necessarily considered a defect.