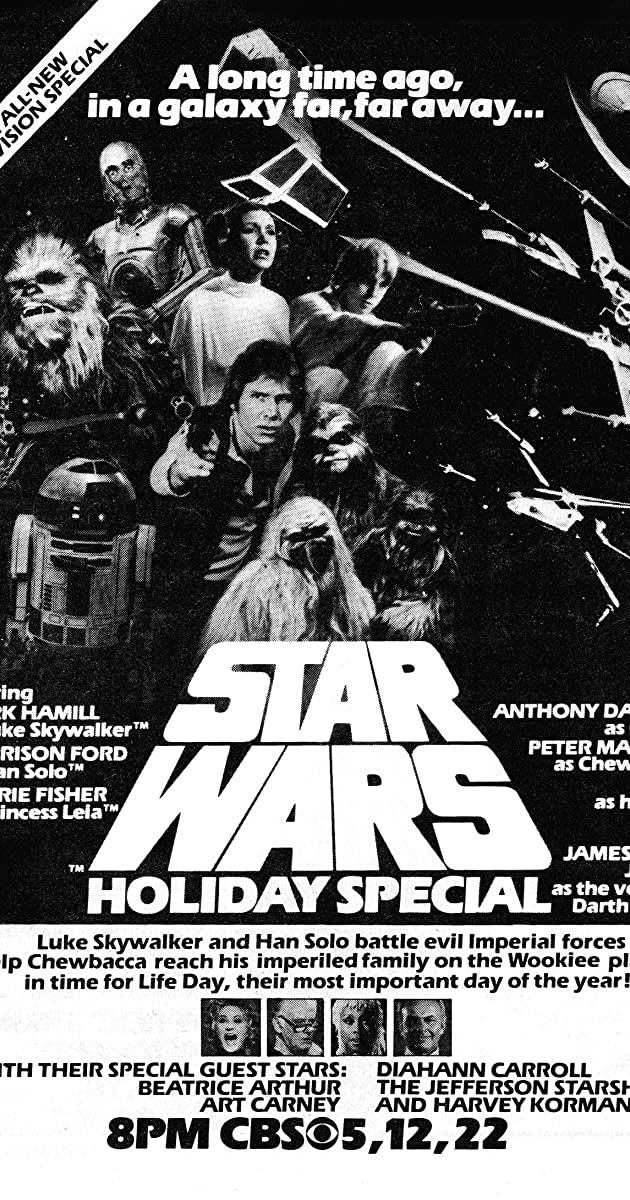 The Star Wars Holiday Special aired on November 17, 1978 (the week before Thanksgiving) and was universally panned. Set between the events of the original movie and The Empire Strike Back, the show was the first Star Wars spinoff. But after hitting the airwaves, the show was pulled from the archives. It was never rebroadcast nor released on home video. Harrison Ford said he had no memory of filming it and therefore “it didn’t exist”. Carrie Fisher said she obtained a copy of the show and played it at parties, “mainly at the end of the night when I wanted people to leave.” George Lucas was said to be so embarrassed by it, he wished “he could find every copy and smash it with a sledgehammer”. Still, Lucas has always maintained the show as a part of Star Wars C-canon (the classification given to officially licensed Star Wars books, comics, and games). Here’s how the $1 million-dollar production turned out so bad while still contributing key events to Star Wars lore.

The production of the Star Wars Holiday Special

CBS came up with the idea of doing a Star Wars TV special – a Star Wars mini-movie with variety acts mixed in. George Lucas was never directly involved in the production of the show (and his name does not appear in the credits). However, he insisted the show center around Wookiees and nothing else. Producers tried to change his mind fearing a show with characters who could not talk would be impossible to create, but Lucas would not give in.

The show’s first director, David Acomba, left the show after feeling there was a divide between him and the producers. He was replaced by Steve Blinder who found the project had spent its entire budget with three-fourths of the show yet to be filmed.

“When I got called in, they had already started production and shut it down because they had spent all their budget and only shot a fourth of the show. So I came in as a kind of a fireman. I got the script on a Friday, and I started shooting on a Monday. When I saw the script, I saw the first 10 minutes with the Chewbacca family was just in subtitles. I thought, ‘Uh-oh, we’re gonna be in trouble.’ But I had no say in changing anything at that point — I just had to get it shot.”

With a “Wookiee Bible” given to him by George Lucas, Blinder set out to complete the project in record time with limited resources.

All of the acts in the special were loosely linked together. There were musical numbers (Jefferson Starship), celebrity cameos (Art Carney, Harvey Korman, and Bea Arthur), animation (The Faithful Wookiee, a cartoon that debuted Boba Fett), skits, and variety show acts (acrobatics, juggling) intermingled with the primary plot (Chewbacca trying to return home to his family). Unfortunately, the mixing of unrelated variety acts drive by a Star Wars plot proved to be too disjointed and the poor acting and cheap film sets made the show laughable.

Finally, if the plot and filming problems were not enough, Blinder was unable to edit the film due to scheduling conflicts. Instead, the special was edited by the producers – none of which had any prior experience with editing. Thus any hope of stitching together a workable show was dashed.

The night the special aired had been a busy news day. A CIA agent was sentenced to prison for selling a US spy satellite manual to the Soviet Union and Russia admitted to violating a treaty by testing a neutron bomb. Thus many of the commercial slots were filled with breaking news coverage of the events, further damping the holiday spirit of the show.

The Star Wars Holiday Special aired on CBS from 8:00 PM to 10:00 PM Eastern Time. It pre-empted Wonder Woman and The Incredible Hulk.

The Star Wars Holiday Special plot, which George Lucas sketched out, served as little more than a means to string together a series of musical numbers, celebrity cameos and other variety-show acts. In fact, the plot could be summed up in one sentence: “Han and Chewbacca avoid Imperial forces so they can return to Chewy’s home planet for the celebration of Life Day.” George Lucas later explained the problem with trying to mix a variety show into a Star Wars plot.

“It just kept getting reworked and reworked, moving away into this bizarre land. They were trying to make one kind of thing and I was trying to make another, and it ended up being a weird hybrid between the two. I’m not sure either position would have worked on its own, but by combining them.”

The show begins with Chewbacca and Han Solo travelling to Chebacca’s home planet, Kashyyyk, for a “Life Day” celebration. They are chased by two Star Destroyers but manage to escape by slipping into hyperspace.

Meanwhile, on Chewbacca’s home planet, Kashyyyk, his family prepares for his visit in a poorly conceived and poorly acted introduction. As seen throughout the show, an acrobatic skit is clumsily worked into the scene via the child watching a television program. All of the skits in the show are presented in this cloddish manner.

Chewbacca’s wife, Malia, runs a scan to search for Chewy’s ship and finding no ships in the area, begins to contact others to see if they have heard from Chewbacca. After several minutes of irritating Wookiee grunts, groans, and screams (actually recordings of bears, including a baby bear for the voice of Lumpy), various original Star Wars characters begin to make appearances . Luke Skywalker makes his first appearance in this manner.

Chewbacca and Han come out of hyperspace near Kashyyyk but are still being attacked by an Imperial convoy in the area. At Chewy’s home, the TV is interrupted with a warning about Rebels in the area. More skits are worked into the special, portrayed as TV shows playing on Wookiee television.

A spaceship is heard passing over the Wookiee home. Malia opens the door to see who it is and finds two Imperial stormtroopers who have been tasked with finding Chewbacca. They force their way into the home and conduct a search in another poorly-acted scene. While the search is being conducted, one of the Imperial soldiers is entertained by Jefferson Starship playing a spacy musical number, Light the Sky on Fire, on a 3D-projection device. The clip marked Marty Balin’s final appearance with the band.

During the search, Chewbacca’s son, Lumpy, is kept busy with a machine that plays a cartoon. It is in this cartoon that Boba Fett, the “best bounty hunter in the galaxy”, is first introduced when he saves Luke Skywalker from a dragon on the planet Panna. The cartoon is a bizarre tale about the hunt for a mysterious talisman. As shown in the cartoon, when Han and Luke are exposed to the talisman, they are “contaminated by a virus” and “go to sleep”. The only way to cure them is to hang them upside down so the blood can rush to their heads. Despite the silliness of the story, this segment has become one of the most popular aspects of the show.

Lumpy (and the viewing audience) watch a Harvey Korman Howto skit about creating a device that changes your voice. Lumpy decides to build the device, change his voice to sound like a Stormtrooper leader, and trick the Imperial forces by ordering them back to their base.

This brings us to the only part of the Star Wars Holiday Special, other than the earlier Boba Fett cartoon, that received even remotely good reviews – a Harvey Korman and Bea Arthur comedy skit. While the Imperials are searching downstairs, the living room viewscreen activates, announcing that Tatooine is being put under curfew by the Empire because of “subversive forces”. The video is announced as required viewing for all viewers. The skit features Ackmena (Bea Arthur) running the Mos Eisley cantina. She is approached by an admirer: Krelman, an amorous alien played by Harvey Korman, who has misunderstood something she said to him during his last visit (“Come back soon, I’ll be waiting.”).

The cantina scene took a full 24-hours to shoot, from 6:00 AM one morning to 6:00 AM the next. During the filming, nurses walked among the actors in their alien costumes, feeding them oxygen through a tube so they didn’t pass out.

Lumpy creates the device that tricks the stormtroopers into returning to base. However, one Stormtrooper realizes what Lumpy has done. He finds the machine, destroys it, and nearly destroys Lumpy before Han and Chewbacca arrive and kill the stormtrooper. There is a highlight here, though. The Wilhelm Scream is clear.

The next sequence can only be described as utterly bizarre. The danger averted, the family disappears into a light. We can only presume they have gone to the Tree of Life to celebrate Life Day.

Finally, we see the Life Day celebration, see all the characters unite, and hear a sappy speech from Princess Leia. Then Carrie Fisher breaks out in song (“Happy Life Day”).

The show ends with the Wookiee family sitting around a table and bowing their heads.

Finally, the credits roll and every watcher breathes a sigh of relief when the announcer reminds them that Wonder Woman and The Incredible Hulk will return next week.

Despite the show’s terrible presentation, it proved important to Star Wars franchise.

Less the shame be forgotten, here are the actors and characters who participated in this monstrosity.

Glutton for punishment? You can watch the full Star Wars Holiday Special below.