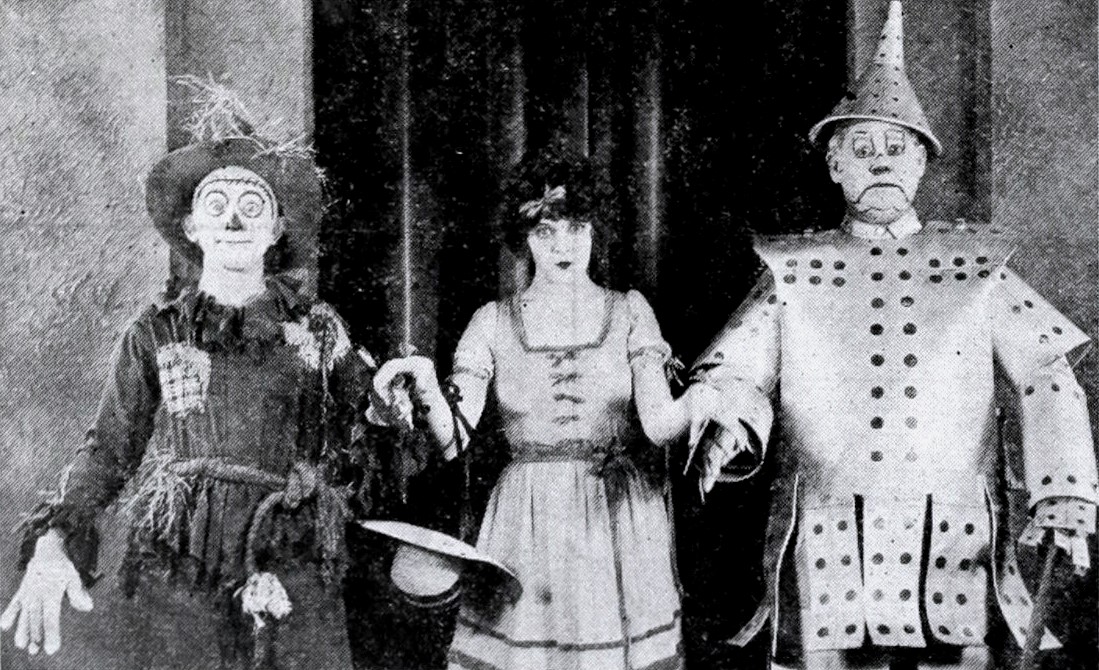 Little known and for good reason, often overlooked, there was a Wizard of Oz film produced more than a decade before the classic hit that starred Judy Garland. Created in 1925 by Chadwick Pictures, the film departs radically from the novel upon which it is based, introducing new characters and scenes not found in the book. In addition, the film is set in a world that is only barely recognizable as the Land of Oz from the books.

The film stars Dorothy Dwan, Charles Murray, and Oliver Hardy, the other half of the Laurel and Hardy team. The storyline is:

“A Toymaker tells a bizarre story about how the Land of Oz was ruled by Prince Kynd, but he was overthrown by Prime Minister Kruel. Dorothy learns from Aunt Em that fat, cruel Uncle Henry is not her uncle, and gives her a note due on her eighteenth birthday, which reveals she is actually Princess Dorothea of Oz, and is supposed to marry Prince Kynd. She, Uncle Henry , and two farmhands are swept to Oz by a tornado. Snowball, a black farmhand soon joins them after a lightning bolt chases him into the sky. They land in Oz, where the farmhands try to avoid capture. Semon becomes a scarecrow, Hardy briefly disguises himself as a Tin Woodman, and Snowball is given a Lion suit by the Wizard, which he uses to scare the Pumperdink guards.”

In ads from the day, the taglines were printed as follows:

“The Thrilling Comedy Cyclone! The Wonderful Land of Oz! The Den of Man Eating Lions! The Famous Scarecrow and Tin Man! The Startling Airplane Rescue! The 100 Foot Leap for Life! All combined in the greatest screen novelty ever made.”

The film focuses mainly on Semon’s character, who is analogous to Ray Bolger’s Scarecrow character in the 1939 version. But in a major departure from the book and classic film, the Scarecrow, the Tin Man, and the Cowardly Lion are not actually characters, but are only disguises donned by the three farm hands after they are swept into Oz by a tornado.

Dorothy is identified as being 18 years old, an appreciably older character than in the 1939 production, where Judy Garland’s Dorothy is presented as a preadolescent, a girl just beginning to enter her teenage years. In an even more radical departure from the original book, the Tin Man is portrayed as a villain who betrays Dorothy, Scarecrow, and the Lion.

The movie did not do well in theaters, partly because many theaters that booked the film never received it because its production caused Chadwick Pictures to go bankrupt and cease distribution, but mostly because, well, it’s not very good.