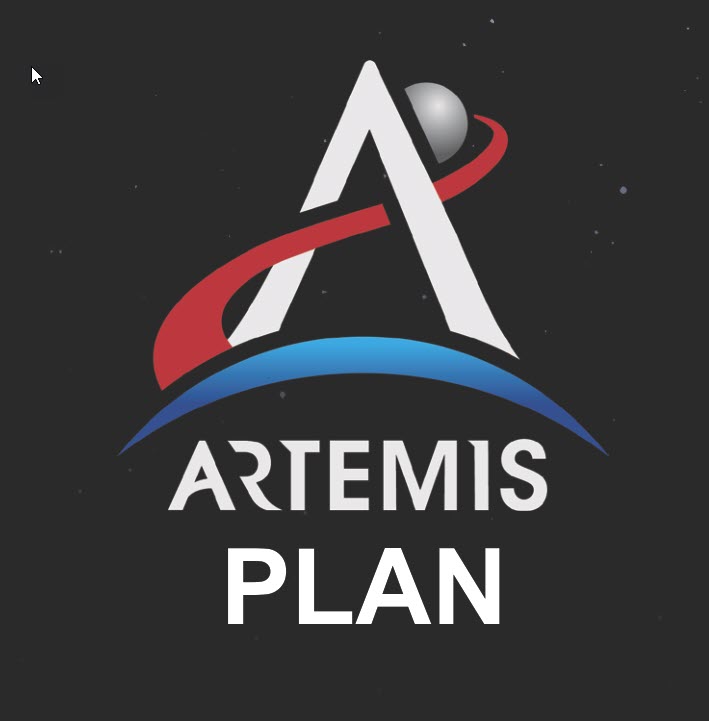 About the Artemis program

The 250,000 mile trip to the moon is a massive undertaking. Now imagine the complexity of a 140-million mile trip through space to reach Mars. But NASA has formulated a plan to take man to Mars in small steps via a ambitious program called Artemis. It’s a program that will without a doubt, change the world.

The Artemis program will operate in at least seven stages in two phases. During these stages, NASA plans to send humans back to the Moon where they will set up a permanent lunar base, the Artemis Base Camp. At the South Pole of the Moon, this new base camp will become the stepping stone that will vault us to Mars and back.

In short, a Space Launch System (SLS) will carry the Orion Crew Vehicle to the orbiting Habitation and Logistics Outpost (HALO). From HALO, astronauts will use the Human Landing System (HLS) to reach the Moon’s surface and back to HALO.

About Near Rectilinear Halo Orbit

Before discussing the Artemis program, we must understand Near Rectilinear Halo Orbit or NRHO. In gravitational mechanics, a three-body problem is presented. How can an orbit be maintained around the Moon given the gravitational pull and interaction between three bodies – the Sun, Earth, and Moon. This problem is solved by putting the orbiting vehicle in a Near Rectilinear Halo Orbit.

The core mission elements that will make Artemis possible

A firm grasp of the Artemis program requires an understanding of the mission elements. There are lots of acronyms and new technologies introduced in NASA’s Artemis program.

The Space Launch System refers to the rocket used to power the Artemis spacecraft beyond Earth’s orbit. SLS will be used to launch the Orion Crew Vehicle.

Orion is the spacecraft that will carry crewmembers to the Moon. Orion will not land on the moon but rather, will orbit around it while a Human Landing System (HLS) is used to ferry astronauts to the moon’s surface and back.

Orion will include storage space and crew quarters and a means to generate power.

The Habitation and Logistics Outpost (HALO) will be the orbiting component where crewmembers will live. It will have storage space for payloads and docking ports for visiting spacecraft. HALO will be placed in a Near Rectilinear Halo Orbit around the moon and kept there using the Power and Propulsion Element ( PPE).

The Human Landing System (HLS) is the vehicle that will transport crewmembers from Orion to the lunar surface. HLS is a habitable spacecraft with its own power generation, energy storage, propulsion (chemical), communications, and tanks. The first models will hold two crew members. Later versions are planned to hold four crewmembers. At the time of this writing, three companies have been contracted to build HLS – Blue Origin, Dynetics, and SpaceX.

The Deep Space network (DSN) refers to the computer network that will be used to communicate between Earth and the moon. DSN will include a 100 Mbps downlink and a 20 Mbps uplink – rather slow when compared to earth-based communication networks. This network link will be used to provide communications to crew members as well as the transport of data from the Lunar surface.

The Commercial Lunar Payload Services (CLPS) will be used to deliver scientific instruments and critical infrastructure components to the Moon. American commercial companies will be outsourced to provide these services for the Artemis program.

The Volatiles Investigation Exploration Rover will carry the Neutron Spectrometer System (NSS), Near-Infrared Volatiles Spectrometer System (NRVSS), Mass Spectometer Observing Lunar Operations (MSolo), and the TRIDENT drill on the Moon’s surface. About the size of a golf cart, VIPER will roam around the Moon conducting tests and analyzing results. It’s a critical component in the search for water and ice on the Moon.

The Power and Propulsion Element (PPE) will be a part of the Habitation and Logistics Outpost (HALO) module. Attached to the end of HALO, it will be in a Near Rectilinear Halo Orbit around the Moon. HALO’s PPE module will assist with communications while generating about 60 kW power for the Gateway using giant solar panels. It will also have space for storage of some payloads.

The Deep Space Logistics component also attaches to the Habitation and Logistics Outpost (HALO). It contains redundant navigation controls, communications systems, and power generation that let it attach and detach from HALO. It has both pressurized and unpressurized cargo areas. It will be used as the gateway for cargo, experiments, and supplies to the Gateway.

The Exploration Extravehicular Activity System (xEVA) references the systems used in the astronaut’s spacesuit. The suit can be used for Moonwalks and spacewalks. It is designed for long life and expandability. The pressurized garment has a portable life support system, built-in communications, and infomatics systems.

The Lunar Terrain Vehicle (LTV) is the transportation vehicle that will be used on the Moon’s surface. It primarily uses battery storage but has limited power generation facilities built in. It can hold two crewmembers plus extra payload storage space. It can also be operated remotely and used to transport small supplies to other locations on the Moon.

Lunar Ground Stations (LGS) will include an array of 18-meter antennas. This global network will provide for current and future communication and tracking services. The number of antennas will be expanded and used for future Mars expeditions.

Lunanet refers to the framework and protocols used to support the communications and navigation network for NASA. Ultimately, Lunanet will be the networking framework for robotic, science, and human operations between Earth and the Moon.

The Habitable Mobility Platform (HMP) is a larger Lunar rover with a enclosed and pressurized cockpit. It includes plenty of power generation facilities and storage bays. It is critical for testing of future Mars missions which will require a Mars HMP.

The Foundation Surface Habitat (FSH) is the long-term outpost where Lunar visitors can live for up to 60 days. It will be the first step for extended occupation on the Moon.

Before building FSH, a robot will investigate the Moon’s south pole scouting for a suitable location to build the habitat. Commercial Lunar Payload Services (CLPS) and Large Scale Cargo Landers (LSCL) will be used to transport building supplies to the site.

The Lunar/Mars Surface Power system is a nuclear powered generator that can supply up to 10 kW of power for Moon-based equipment. This will provide power for landers, habitats, and other systems. It will be built to operate through nighttime hours and during eclipses.

The Gateway refers to the combination of several components. As the name implies, it acts as the gateway structure to the surface of the Moon. Included as part of the Gateway are the Power and Propulsion Element (PPE) and the Habitation and Logistics Outpost (HALO). The Gateway (PPE + HALO) will be placed on the Moon between the Artemis I and Artemis II missions.

Nine Artemis missions are already planned through the year 2030.

Artemis I will be an uncrewed test flight and the first flight of the Orion MPCV and Space Launch System rocket. Using engines from the Space Shuttle program for the core of its Space Launch System, the Orion will be pushed into space then released so it can coast 40,000 miles past the Moon before returning to Earth.

This main purpose of the Artemis I mission will be to test the SLS rocket and the heatshields which must protect the vehicle from temperatures reaching nearly 5,000 degrees Fahrenheit (about half as hot as the surface of the Sun).

This first test of the Orion will be accompanied by the launch of research utilities to study the moon in preparation for the next mission. CubeSats, small, low-cost, cube-shaped researched satellites, will be launched too. The CubeSats will study the moon and the space above it and observe space radiation, record magnetic fields, search for ice and water, map hydrogen sources, test solar sails, and do a generalized study of the moon’s surface.

The mission will last from 4-6 weeks.

Separate support missions will be launched in between the Artemis missions. These missions include:

Artemis 2 will be the first crewed Orion spacecraft flight. It will include a lunar flyby test and return to Earth, the first such mission in more than 50 years. Four astronauts will fly aboard on a mission that may last up to 21 days. This mission is equivalent to the Apollo 8 mission.

The purpose of the mission is to test life support systems and spacesuits they wear for launch. Since the spacecraft will fly beyond our GPS navigation system satellites, it will allow a test of the new Deep Space Network (DSN).

As with Artemis I, secondary payloads of CubeSats will be launched too.

Artemis 3 will be the second crewed mission of the Artemis program and the first crewed lunar landing since Apollo 17 in 1972. It will be a historic mission. Two astronauts will use the Human Landing System (HLS) to reach the moons surface where they will stay for about a week. Two other crew members will stay board the Orion and orbit the Moon. Before the landing. additional equipment will be pre-positioned on the moon’s surface (e.g. lunar rover vehicle) waiting for the astronauts’ arrival.

The remaining missions are “proposed missions”, one mission per year. These missions are a part of Artemis Phase 2. These missions would be used to test resource utilization on the moon’s surface, power requirements (nuclear), and other prolonged activities on the Moon. The missions range from 30 to 60 days in length (the later missions will be longer). The purpose of these missions is to establish Mars forward capabilities. NASA will use this period to test systems and search for resources on the Moon for fuel and life support.

Little is known about the proposed missions. However, NASA has published the timeline for Artemis Phase 2.