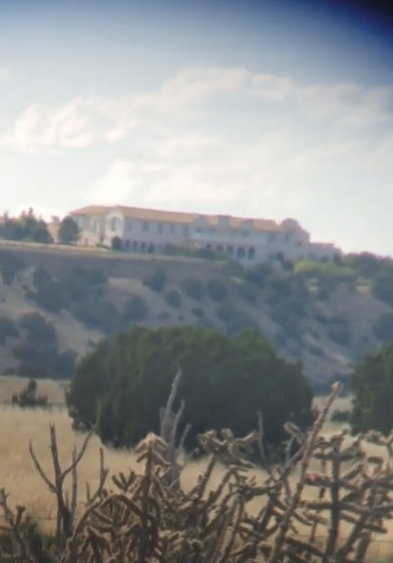 Had a chance to “swing by” Jeffrey Epstein’s Zorro Ranch in Stanley, New Mexico. The ranch is a little more than an hour away from Albuquerque and even though it’s commonly said to be located in Stanley, New Mexico, it truly is in the middle of nowhere. The main entrance (southeast side) is by a paved road. Just inside the main entrance is a thick grove of trees and what looks like a small town, several houses and other structures which I presume are guest houses for ranch hands. The road that leads to the ranch house passes right between these houses so there’s no way to drive to the main home without being detected. Also, there’s an odd/cellphone/radio complex on a hill behind the guest houses. Although it would be easy to enter the property, it is well-marked with no-trespassing signs all along the fences.

Using miles and miles of one-lane dirt roads, I traveled around the perimeter of the property and found a second entrance on the northwest side (see gallery below). Again, everything is well-marked with no-trespassing signs.

Three things stood out. First, the radio/satellite equipment on the property. My initial thought was “someone could pose as the communications personnel to access the property.” Then I wondered why the equipment was there in the first place since it was not on the highest point of the property. I believe the ranch was owned by a New Mexico governor at one point so possibly it was communications equipment for use by the ranch (I’m fairly certain there would be no other means of communication this far out).

Secondly, they were doing construction in the area. In fact, there’s a dirt lot next to the property with road equipment parked on it that makes a great spot to pull over and snap unimpeded pictures of the home. Just a little north of the home, I saw a guy with a telescope-like equipment. There were red construction cones on the shoulder to direct traffic away from him. I figured he was surveying but it did occur to me that authorities may be watching the property. I suspect the guy was a legit surveyor though.

Lastly, I saw another guy taking pictures in the area. This was north of where I saw the guy surveying. The photographer didn’t seem interested in the ranch property and instead, was taking pictures of a nearby hill. Again though, I wondered if he might be secretly watching the property or if he was there like me, curious and taking pictures of the ranch. The only other humans I saw even close to the area were a construction crew working several miles down the road.

Below are pics I took of the property. Click the first pic for larger, slideshow view.