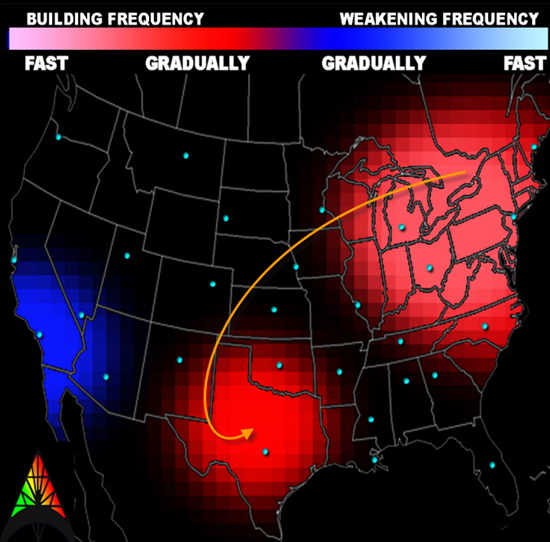 In July 2013, weather forecasters noted a highly unusual weather pattern currently across the United States, one that moved from east to west. The strange movement of the storm system brought concern to some that the secretive HAARP (High Frequency Active Auroral Research Program) program may be conducting weather experiments and/or manipulating the weather around the United States.

HAARP is a jointly funded project funded by the US Air Force, the US Navy, the University of Alaska and the Defense Advanced Research Projects Agency (DARPA). The program’s focus is to identify new technologies for radio communications and surveillance. Among other things, HAARP has also been blamed for earthquakes, mind control, and yes, weather modifications.

In the satellite photo below, note the current weather pattern moving across the United States. The origin appears to begin in the northeastern United States with a hook-like pattern that terminates in Texas, which was already experiencing high levels of rain and flash flooding.

Compare the weather satellite photo to HAARP longwave frequency magnitude readings. According to independent researchers, two areas were experiencing an unusually high magnetic phenomenon – the northeast United States with a second, extremely high-magnitude bubble occurring over Texas.  Surrounding the bubble, and almost hooking around it, was a large area experiencing a lower-level magnitude reading.  The arrow in the photo was taken from the satellite photo above and dropped on the magnetic reading chart to illustrate how the HAARP reading ties in with the weather system.

Below is another magnetic map showing how fast the magnetic changes are occurred across the United States. Again, the areas that experienced the fastest magnetic change were the northeast United States and Texas. A lower, “gradually’ changing magnetic field is in California, in the area where the storm system was expected to terminate later that week.

The storm system was expected to move all the way across the country before fizzling out near California. East to west movement is extremely unusual and when it does occur, the system always moves for only a very short period of time. This particular system, however, began in the eastern U.S. and was expected to make it nearly all the way across the United States, a weather system movement pattern that is virtually unheard of.