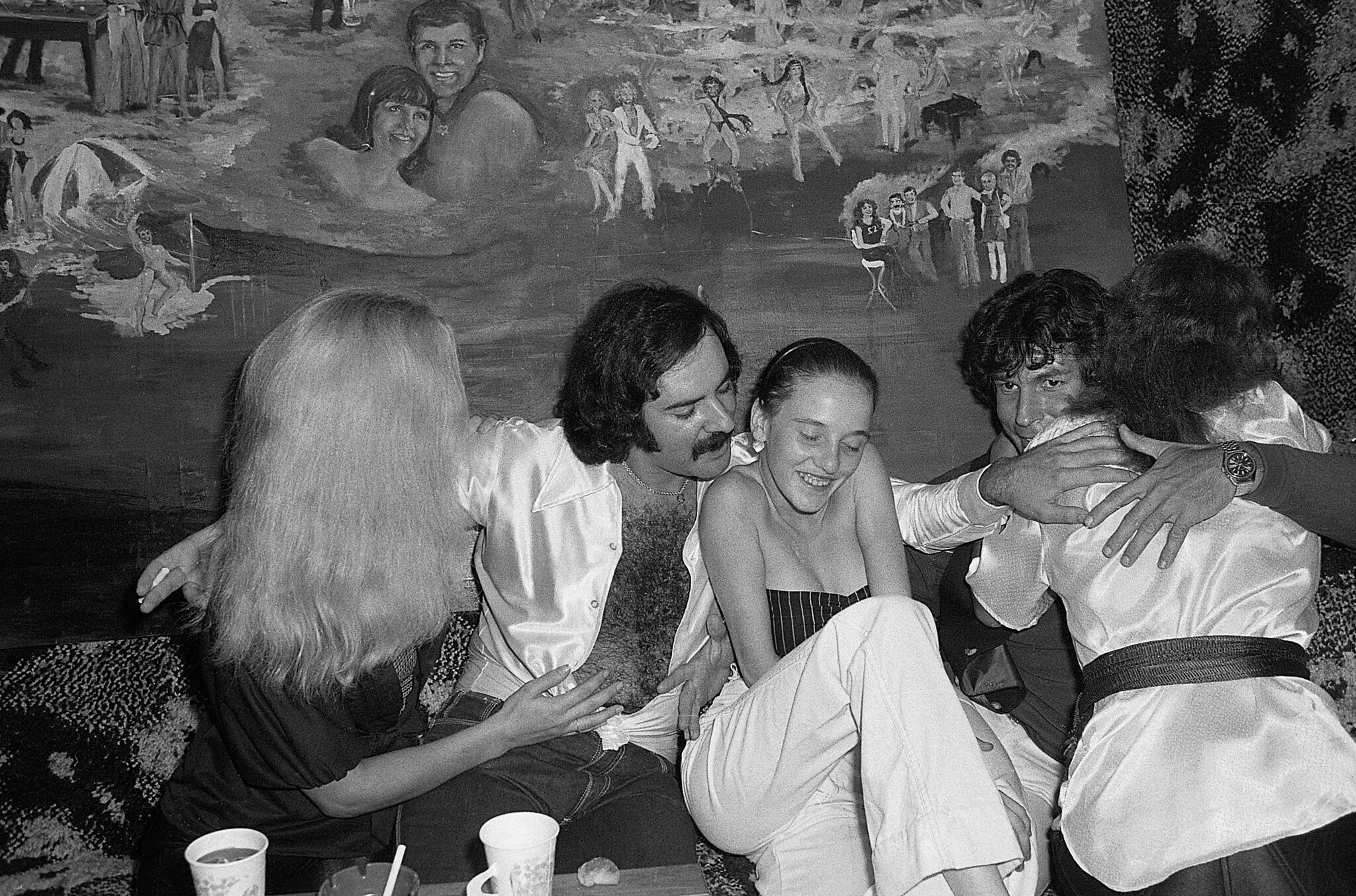 Plato’s Retreat opened its doors in 1977. Located in the basement of the famous Ansonia Hotel, an ornate 19th century building where Broadway and 230 West 73rd Street meet, the club operated a “member’s only” establishment which required patrons’ strict adherence to the Club’s rules. Couples could be straight only – no homosexuals allowed. Drugs were not allowed. Alcohol could not be consumed on the premises.

Originally housing the Continental Baths, a famous gay bathhouse, owner Larry Levinson cleverly ensured that the number of women outnumbered the number of men – couples only were allowed and the woman’s male counterpart was required to accompany his companion. Sexual activity between men was strictly prohibited but lesbianism was always welcome.

Publicity and Success for Plato’s Retreat

Part of Plato’s success may be due to the celebrities that were known to visit or work at Plato’s. Plato’s Retreat received a shot of publicity when Bette Midler, who had spent many nights performing cabaret acts with her pianist Barry Manilow for Continental’ and Plato’s clientele, mentioned the famous sex club on The Tonight Show in 1980.

Larry’s rules and hospitality propelled the Club to icon status in New York City. Travellers from around the world added Plato’s Retreat to their must-see list of New York City sights to see. Owners Levenson and Ross soon added a hot and cold buffet and charged $25 per couple. Viewing areas were added to allow “nonparticipants” access to the show. The “no drugs allowed” rule was frequently violated which further added to the “hip factor” that promoted the surge in Plato’s Retreat’s popularity.

“When I arrived at Plato’s shortly before midnight, there were about 85 couples on hand, and I counted roughly 30 naked people among them. Later, at about 2 A.M., there were about 150 couples, and I’d guess there were about 70 people in their birthday suits. A variety of sexual feats were being performed nearly everywhere — in the pool, in the whirlpool bath, on the lounge chairs, and in a large, thickly mattressed swing room. Trio sex — usually two men and a woman — was not uncommon. I also spotted several women making love to each other. . . .

Still, just wandering around Plato’s can be a lively experience. For example, I strolled into one area that houses about 40 cubicles where people can make love in private. While there I suddenly heard moaning. I thought someone was hurt and rushed over. As it turned out, the moans were coming from a girl, perhaps nineteen, and they were moans of pleasure, not pain. Her companion, another girl, in her late twenties, smiled at me, and said: “Why don’t you come in?” I blushed, thanked her, and walked away.

The next such invitation was difficult to turn down. It came from Andrea, a striking brunet [sic] of about 27. She saw me walking about with a pad, asked me if I was a reporter, and then pleaded with me: “Don’t call this place a f–k joint, because there’s more to it than that. You can have brief, beautiful relationships here. Every city should have a Plato’s.”

However, not everyone felt Plato’s popularity was warranted. Time Magazine gave Plato’s a less than flattering review. ” . . . there are losers even at orgies,” the reporter wrote. “An enormously fat woman has been sitting around in her underwear for hours, wanly looking for a man . . . Oddly enough, there is less sexual energy in the air than at a Rotary Club party. All the trappings of the normal sexual dance — talk, gestures, and clothing — are stripped away as unessential, and emotions are under tight control. As a result, the proceedings are amicable, but flat . . . many patrons seem bored. A pleasant young woman with a distressing overbite is standing at the bar, staring aimlessly into middle distance. ‘I don’t know why I’m here,’ she says. ‘I’m only nude because there’s nothing to do here with your clothes on.’ “

Membership to the “poor man’s Playboy Mansion” was cheap. Six-week memberships cost couples $5. With over six thousand members and grossing nearly $100,000 a month (in 1970 dollars), Plato’s Retreat was no small venture.

Patrons speak out about Plato’s Retreat

Years later, patrons of the establishment told outlandish stories of the goings on. In 2007, Movie Directors Jon Hart and Matthew Kaufman ran ads in major newspapers across the country prodding Plato’s Retreat sex club patrons to send in their stories. They were pleasantly surprised as the stories began pouring in. The movie American Swing (2009) featured those stories in a documentary built from old archival footage taken during the club’s heyday. Much of the archival footage shown in movie American Swing came from the raunchy Manhattan Cable show “Midnight Blue,” which, in its heyday, regularly covered the Plato’s scene.

The closing of Plato’s Retreat

In 1985, the AIDS scare prompted the City of New York to close all gay establishments.  However, a newly adopted anti-discrimination law meant heterosexual sex clubs must close their doors too.  As a result, Plato’s Retreat relocated to Fort Lauderdale, Florida at 321 West Sunrise, and remained in business until 2006 when it again closed its doors only to reopen that same year as “Plato’s Retreat 2/The Slammer”, a sex club for men only.