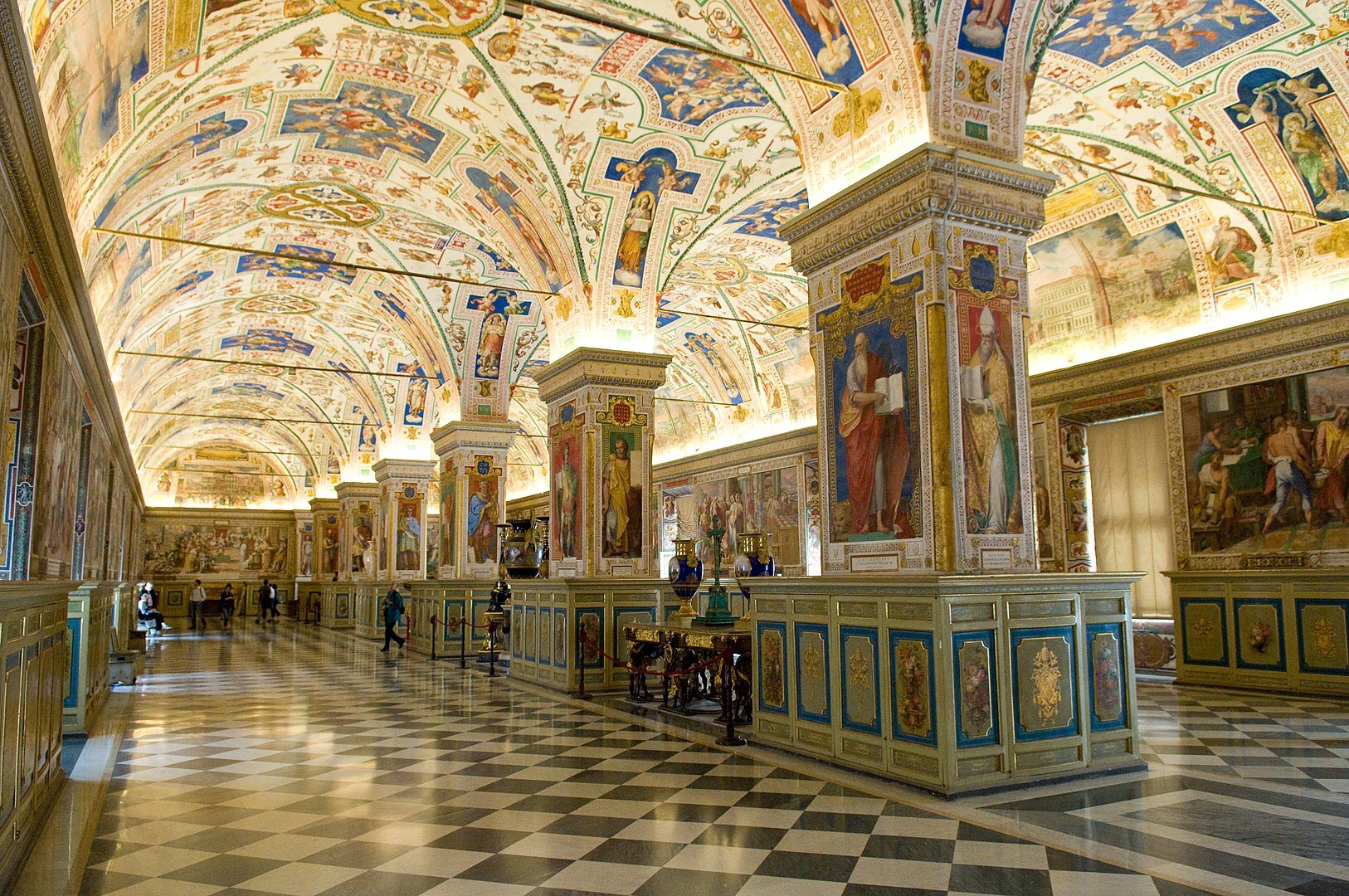 In Vatican City, the walled enclave within the city of Rome, there is an archive containing more than 75,000 codices from throughout history and an estimated 1.1 million ancient, printed books. It was officially designated the Vatican Apostolic Library (aka Vatican Library or the Vat) in 1475 although the collection is much, much older – one of the oldest in the world. If you are a researcher, and can sufficiently document your need for access, the collection is open for limited periods of time – except for a section of the library known officially as the Vatican Secret Archives.

From the main library, go by the way of Porta Angelica, through Porta di Santa Anna and you will find the entrance to the Vatican Secret Archives adjacent to the Vatican library. If you were visiting the Vatican’s Tower of the Winds (the first astronomy tower, built in 1578), you’d pass right through it. The only way to the Tower is through the Secret Archives.

“It was lined floor to ceiling with leather-bound indexes, each one a foot thick, giving it the haunted air of a medieval alchemist’s laboratory. Succulent frescos spread across the 30-foot-high walls, depicting the shipwreck of St. Paul in Malta (an act of divine meteorological manipulation), and the ceiling was painted with glittering stars. Etched into the floor were circles with the names of the winds, Tramontana, Sirocco, Ostro. My eye was drawn to a coin-sized hole in the wall revealing a tiny circle of actual sky. Every March 21, Grilli explained, a ray of sunlight will point at noon on an eight-pointed rosette in the floor to mark the spring equinox.”

Secrets inside the Vatican Secret Library

Nothing in the Vatican Secret Archive is indexed. In fact, indexing its contents is forbidden by Catholic law. And browsing the library is not allowed either.

The Vatican claims it contains documents dating back to the 8th century, but many believe it contains much, much older artifacts. Since divulging items contained in the collection is considered a grave sin punishable by excommunication from the church, what truly lies inside is a mystery.

It is believed that the only human on earth with unfettered access to the Vatican Secret Library is the Pope himself (technically, the Pope is the owner of the Secret Archives). Rules allow for special permits to be provided for carefully accredited researchers, but journalists, students, and amateur historians are barred.

For those that manage to gain access, there are strict limitations to what archive material they can access and view. Even for those rare individuals who are allowed to enter, there are entire sections that are strictly forbidden.

Researchers are only allowed to access three items per day. The items they wish to view must be specifically documented in their request, a remarkable feat given nobody truly knows what’s inside.

Researchers are only allowed to bring a pen and paper into the vaults. While inside the library, they are accompanied by two priests and two guards that stay with them throughout their time in the library. And their visit is timed.

What we know is inside the Vatican Secret Library

In 2012, the Vatican attempted to quash public fear by revealing the existence of several items held in the Vatican Secret Archives. The following were found to exist within its walls.

Document that began the Protestant Reformations

The document that not only signaled the birth of modern-day Christian (Anglican) churches but also rooted the term “red tape” into existence – a 1530 petition, sealed with red tape, from eighty-five English clergymen asking Pope Clement VII to annul King Henry VIII’s marriage to Catherine of Aragon. Pope Clement refused, of course.

A letter from Michelangelo complaining that Vatican guards had not been paid in three months and were threatening to walk off the job.

Document that split the New World

The document that split the New World between Spain and Portugal – Pope Alexander Vi’s 1493 papal bull, the Inter Cetera.

Letters from Abraham Lincoln and Jefferson Davis (who attempted to convince Pope Pius IX that the South was an innocent victim of Northern aggression).

The Doctrine of Immaculate Conception

The doctrine of Immaculate Conception, written in 1854 on a piece of parchment, which confirms Mother Mary was conceived without original sin.

Transcripts from Vatican trials including cases against the Knights Templar in the early 14th century and astronomer Galileo Galilei in the 17th century (who was tried for heresy and forced to spend the remainder of his life under house arrest).

A 1654 letter to the Pope from Sweden’s Queen Christina announcing her conversion to Catholicism. She is one of the few women buried in St. Peter’s Basilica.

Letter from Mary, Queen of Scots

A letter from Mary, Queen of Scots, written to the pope while awaiting her execution after being found guilty of plotting to assassinate her first cousin once removed, Queen Elizabeth I.

What some people think is hidden inside the Vatican Secret Library

The documents released in 2012 were remarkable but not earth-shattering – especially considering the items that have long been rumored to be housed within the Vatican Secret Archives. With no indexes documenting the vault’s contents and intricate regulations prohibiting examination of the relics within, there is no way to prove what is contained within its walls. However, there are stunning artifacts purportedly witnessed by persons who have been inside the Secret Archives.

Most surprisingly, a time machine has long been rumored to be stored inside the Vatican Secret Archives. Called the Chronovisor, it was rumored to have been built by Benedictine Monk, Father Pellegrino Maria Ernetti. The device is described as being similar to a television and is used to travel back and forth in time, including to the time of Jesus’ crucifixion, to view and verify historic events. According to sources familiar with the device, it achieves time travel by “receiving, decoding and reproducing the electromagnetic radiation left behind from past events.”

Proof earth was visited by aliens

“A friend of mine used to work at the Vatican translating. She was a nun. Because of what she read, she ain’t a nun anymore.”

The evidence of alien life is generally believed to be the remains of an alien being. This evidence is given as the reason the Holy See constructed the Vatican’s astronomy observatory directly above the Secret Archives.

Technological revelations from an alien race

The Vatican Secret Library is rumored to contain technical documents so advanced, nobody within the papacy has yet been able to understand them. These documents are alleged to describe military technology derived or given to us by an alien race. Although the existence of the documents has never been proven, history tells us that two evil leaders who occupied Vatican City or the area surrounding it – Napoleon and Adolph Hitler –went forth to win great wars using advanced technology. Napoleon devoured his enemies using advanced artillery and the Germany’s technological advances soared during World War II. Strangely, in both instances, the leaders left Vatican City and headed straight to Egypt.

A set of alternative scriptures

A variant of an unusual set of alternative scriptures called the Essene Gospel of Peace is available online. A man who viewed the original version said,

“They read like poetry and are very soothing to any soul who is open to reading them.”

Bishop Edmond Bordeaux Szekely examined the scriptures and translated them into a work titled: The Essene Gospel of Peace. The ancient text promotes several alternative visions of theology, some dramatically different from Christian tenets. For instance, the manuscripts reportedly confirm the Essenes were vegetarians and that vegetarianism was prescribed by Jesus. The Vatican denies the original manuscripts exist.

Knowledge of the Egyptian pyramids

The architecture of the Egyptian pyramids has fascinated mankind for thousands of years. Seemingly too technologically advanced for the era they were constructed, nobody is truly sure what their purpose is. Some propose the Egyptian pyramids may have served a similar purpose as the Vatican Secret Archives – a storage facility for knowledge the world is not yet ready for. This could explain why both Napoleon and Hitler headed straight to Egypt after their armies gained control of the Vatican.

The truth about the apocalypse (end of the world)

Many believe the Vatican may know the truth about the end of the world, a period of time known as the Apocalypse. According to historical accounts, the events of the apocalypse were revealed by three children on a hillside in Portugal by the Virgin Mary over a century ago. Witnesses recorded how the message was whispered into the ear of Sister Maria Lucia of Jesus and the Immaculate Heart:

“Lucia wrote down the third secret, sealed it, and entrusted it to Portugal’s Bishop of Leiria, with instructions that it was not to be read until 1960. The Bishop turned the envelope over to the Vatican. Pope John XXIII reportedly opened the envelope when 1960 arrived, but refused to divulge its contents, saying, “This prophecy does not relate to my time.” Pope John Paul II is said to have also read it, and refuses to reveal it on the grounds that its true spiritual message has been obscured by sensationalism.”

It is believed the Vatican Secret Library houses correspondence between Saint Paul and Emperor Nero, potentially containing first-person accounts of Jesus’ life. Included in these correspondences are documentation of Jesus’ bloodline which may or may not contradict holy scripture.

An alternative theory is that Saint Paul or others that witnessed Jesus firsthand, drew a portrait of Jesus and the Secret Archive has possession of the drawing. All portraits of Jesus today were created at the earliest, around 200 years after his death.

It is believed the Vatican Secret Archives house the holiest relics, most of which are presumed lost to time. Given their importance, it’s not difficult to imagine they would have been kept under the closest guard and/or hidden away. Relics rumored to be kept inside the Secret Archives include the Ark of the Covenant, the Holy Grail, and the True Cross that Jesus was crucified upon.