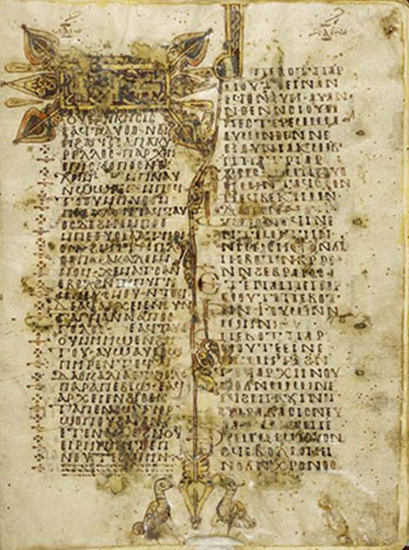 Regular readers know I have a deep respect for all religions but believe that ancient non-canonical sources may sometimes provide additional information about particular religious events, pivotal characters, and deep-seated cultural beliefs.  Such is the case with a set of 1,200-year-old ancient Egyptian texts discovered many years ago in the library of an abandoned monastery in the Egyptian desert.  The text is interesting, not because it proposes that the strange series of events really happened, but rather because it demonstrates what some people believed at that time – that Jesus would, on occasion, make himself invisible and change his appearance at will, a “shapeshifter” so-to-speak.

The manuscript was found by villagers digging for fertilizer inside the remains of the Monastery of St. Michael, a monastery in the Egyptian desert near present-day al-Hamuli.  Fifty-five Coptic manuscripts were discovered including one with text indicating it was a gift from “archpriest Father Paul” and implying that he also wrote it.  The monastery closed its doors around the early 9th or 10th century and the text was rediscovered in spring of 1910.  Several months later, on December 1, 1911, it was purchased by J.P. Morgan who later donated it to the Morgan Library and Museum in New York City where it remains today.

The manuscript reveals conversations between Jesus and Pilate

Written in ancient Coptic language and in the name of Saint Cyril of Jerusalem (a distinguished theologian who lived around 313-386 AD), the text was recently deciphered and translated by Roelof Van den Broek of Ultrecht University (Netherlands) and found to contain part of the crucifixion story of Jesus – only this version contained a few unusual twists.  In one example, the manuscript tells us that Pontius Pilate ate dinner with Jesus before he was crucified and that he even offered to send his own son in Jesus’ place.

“Without further ado, Pilate prepared a table, and he ate with Jesus on the fifth day of the week. And Jesus blessed Pilate and his whole house.”

“Well then, behold, the night has come, rise and withdraw, and when the morning comes and they accuse me because of you, I shall give them the only son I have so that they can kill him in your place.”

At which point, Jesus comforts Pilate:

“Oh Pilate, you have been deemed worthy of a great grace because you have shown a good disposition to me.”

If this sounds like a candy-coated gushy tale catered to make Pilate look good, recognize that in those days, Pilate was regarded by the citizens as a saint.  Again, it may help to view the text for what it is – a peek at what some people believed in those days.

More shockingly, the text goes on to describe Jesus as some sort of shapeshifter.  When Pilate offered his son for the crucifixion, Jesus explained that he could escape capture if he wanted to.

“Pilate, then, looked at Jesus and, behold, he became incorporeal: He did not see him for a long time…”

The text goes on to explain that Jesus’ ability to change his appearance necessitated identification via a kiss from Judas rather than Judas simply pointing him out to the authorities.

According to Van den Broek, who translated the Coptic text, a similar description of Jesus appeared in a 200 AD manuscript, written by theologian Origen in a work titled Contra Celsum.  In that manuscript, Origen stated that “to those who saw him [Jesus] he did not appear alike to all.”