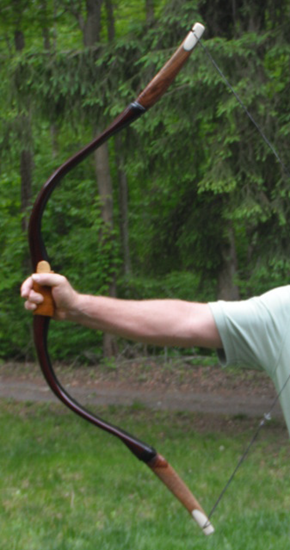 There are a couple of ways to make a PVC bow. In a pinch, you can simply take a 4-6 foot piece of PVC pipe, notch the ends, and string with paracord at a high enough tension to bend the bow limbs (which in physics talk, is storing elastic potential energy in the flexing limbs of the bow which becomes the kinetic energy of the arrow in flight). The second method is a bit more involved but results in a more powerful bow.  This method is possible due to PVC’s inherent ability to bend when heated and retain its shape without weakening the integrity of the material’s structure (unless the PVC is overheated in which case it will crack under stress).

Recurve bows, bows with tips that are bent to curve away from the archer, constructed from PVC pipe can produce anywhere from 30 – 70 pounds draw, which is significantly higher than the energy delivered from an equivalent straight-limbed bow.

How to make a recurve bow with PVC pipe

To make a PVC bow, first cut a piece of ¾ inch schedule 40 PVC pipe into a 4-foot segment for a short bow or a 6-foot segment for a long bow. While wearing gloves to insulate your hands from the heat, lay the pipe on a piece of flat wood and heat with a heat gun while rolling the pipe to ensure it is evenly heated.  Alternatively, you may also hold the pipe in your hand while heating it or heat it over a stove.

Flattening the limbs of the PVC pipe

When the pipe softens, press down on it with another board to flatten the pipe. You will want the ends flattened perpendicular to the archer so that when the bow his held in front of you, in a shooting position, you are looking directly at the flattened piece and not at the flattened edges.  Be sure that you heat both sides of the pipe until it becomes soft enough to bend and that both ends are flattened evenly and to the same degree of flatness. The objective is to flatten the ends of the limbs (the upper and lower working parts of the bow) while leaving the middle section rounded. Also, make sure you don’t overheat the pipe, or you will burn the PVC and weaken the pipe.

Bend the limbs into shape

Flatten the middle of the bow

Once the ends of the limbs are bent and the pipe has cooled, you will need to do the same flattening process to the middle of the bow, where the handle will be located. In this area, you’ll want the handle formed and slightly flattened (so it is oval-shaped) perpendicular to the flattened limbs. This is important. With the middle, handle-section flattened perpendicular to the flattened ends, you will force the bow’s flex more towards the end rather than the middle of the bow (where all the stress would be located in a regular, unformed length of PVC).

Wrap the handle of the bow with paracord

After the middle has been slightly flattened, you can wrap the middle section of the bow with paracord to form a handle and arrow rest. You can also take a small piece of PVC pipe (1-2 inches long), cut out a 1 inch section so it is shaped like the letter “C”, and snap the section above the paracord handle to form a more solid, smooth arrow rest (glue it if needed).  To wrap the paracord, tie a knot in one end of the cord and thread through a small hole drilled near the end of the bow limb, so that the knot is inside the PVC pipe.  Pull all of the cord through the hole and wrap it evenly around the pipe.  You can tuck the end of the cord inside the wrapping and twist to tighten.

Notch and string the bow

Finally, notch the ends of the bow using a hack saw and string with mason string, Dacron cordage, 550 paracord, or any other good, sturdy cotton or linen twine. A piece of felt can be glued to the ends, under the string, to quieten string slap on the recurve.

The picture below illustrates a bow that has not been drawn.  This is the bow shape when it is in a relaxed state.

Notice in the picture below where the bow flexes when tensioned.

Building a PVC bow can take a bit of practice before it comes out perfectly shaped the way you want it. After you have the process down pat, you can begin experimenting with various bow shapes. At only a few bucks per bow and an expected lifetime of 2-4 years, given the excellent performance PVC bows offer, it’s well worth the time and effort.