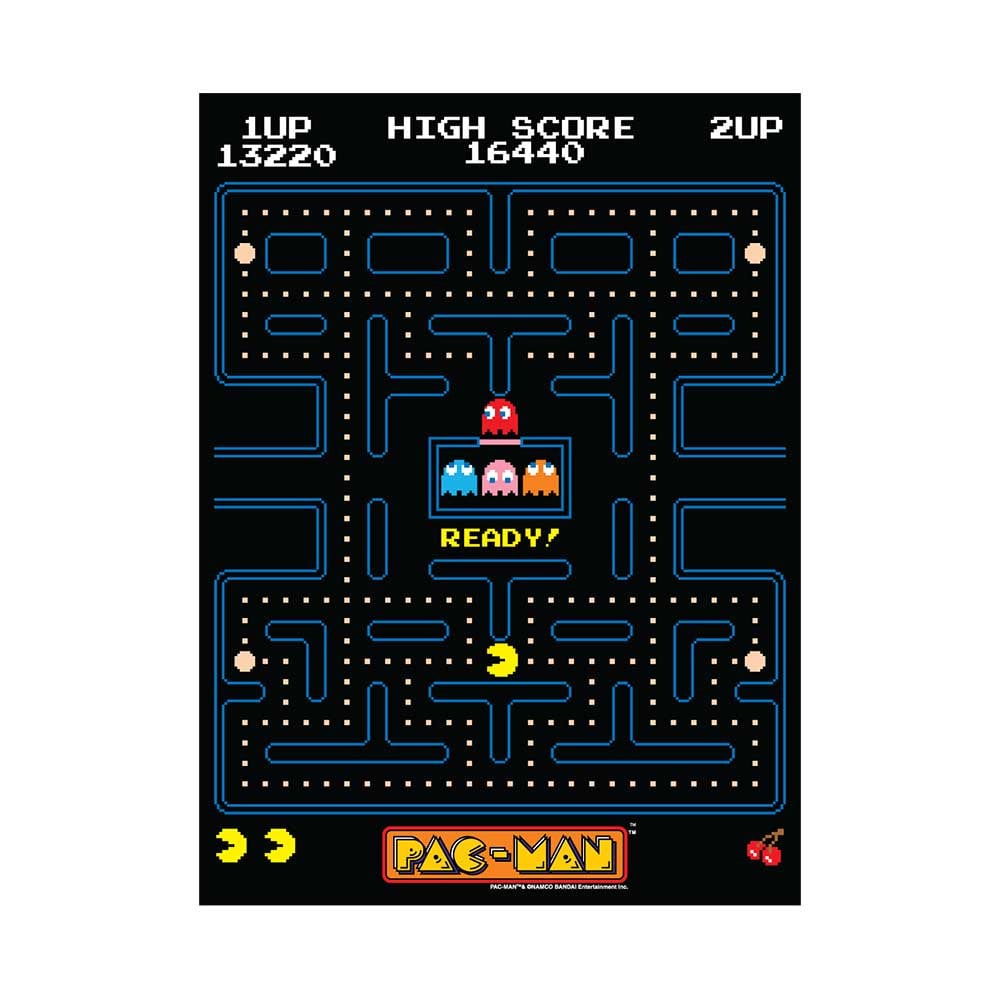 Pac-Man was released to arcades in 1980, more than 40 year ago. It is by far the best-selling arcade game of all time. With such a record, you would think you knew everything there was to know about the game. Not so. Here are some little-known Pac-Man facts that are not just interesting – they can improve your game play too.

The game was originally named Puck-Man but Midway feared players would vandalize the machine and change the “P” to a “F”. The game was renamed Pac-Man just before its release to American arcades in October 1980.

The four ghosts are known as Blinky (red), Pinky (pink), Inky (blue) and Clyde (orange). Each has its own “personality” and game play techniques.

The anatomy of the board

There are 244 dots in the Pac-Man maze, worth 10 points each. The flashing dots, known as “energizers” are worth 50 points each. This yields a total of 2,600 points or clearing the entire board.

The size of the Pac-Man screen

The Pac-Man game screen is 224 by 288 pixels. The screen is divided into tiles – 28 horizontally and 36 vertically. Each tile in the game is 8 pixels square.

The ghosts have three modes they can operate in – chase mode where they find and capture Pac-Man, scatter mode, where they head for their respective corners, and frightened mode where they run away from Pac-Man after he eats one of the four energizers.

Frightened ghosts turn blue and appear to wander around aimlessly while avoiding Pac-Man. In truth, a random number is generated and used to determine which direction the ghost should move at each approaching intersection. If the chosen direction is blocked by a wall, the ghosts attempts the following directions in this order: up, left, down, and right.

Ghosts move at a slightly slower speed than Pac-Man until the 21st level at which point they begin moving faster than Pac-man.

When a level begins, all ghosts move at the same speed, However, Blinky will move twice as fast each round based on how many dots are remaining. When Blinky is in this accelerated state, he is known as “Cruise Elroy”. When in Elroy mode, Blinky will always chase Pac-Man and refuse to go into scatter mode with the other ghosts.

Each dot Pac-Man eats causes him to stop moving for one frame or 1/60th of a second.

Eating energizes slows Pac-Man down even more than dots

Each energizer Pac-Man eats causes him to stop moving for three frames or 3/60th of a second.

Pac-Man can eat ghosts without harm after eating one of the four energizers. The first ghost eaten yields 200 points, the second 400 points, the third 800 points, and the fourth and final ghost 1,600 points.

Ghosts cannot be eaten after level 19

The ghosts’ “blue time” decreases with each level. By level 19, the ghosts stop turning blue altogether and can no longer be eaten by Pac-Man.

Fruits appear randomly during the game and are worth between 100 and 5,000 points. The amount of time a fruit stays visible is always between 9 and 10 seconds.

Pac-Man navigates the turns faster than the ghosts because he does not have to wait until the middle of the turn to change direction as ghosts do. This is why good players push the joystick before getting to an intersection (called “pre-turns”). Turns are how Pac-Man puts distance between him and the ghosts.

The ghost house or monster pen

The area in the middle where ghosts begin their lives (and Pac-Man cannot enter) is called the ghost house or monster pen. Blinky always begins above the ghost house with Inky, Pinky, and Clyde beginning in side the house in that order.

Blinky in the ghost house

Besides Blinky, who leaves the ghost house immediately, a ghost determines when to leave the ghost house by counting the number of dots Pac-man has eaten. Pinky (pink) leaves first. Inky (blue) leaves after 30 dots are eaten. Clyde (orange) leaves after 60 dots have been eaten. Each characters counter begins when the prior character leaves the ghost house. However, there is a timer limit too. A ghost will always leave within 4 seconds during levels 1-4 and 5 seconds starting with level 5, no matter how many dots Pac-Man has eaten.

After level 2, all ghosts leave the ghost house immediately

Ghosts normally leave the house depending how many dots Pac-Man has eaten. However, beginning at level three, all ghosts leave the ghost house immediately after being revived.

Ghosts cannot move upward through the intersections above the ghost house

There is a second area where ghosts cannot move upward

There is a T-shaped wall at the bottom-center of the screen. In the area directly above the T, ghosts are forbidden from turning upward at the intersection. Only Pac-Man can travel upward through these tunnel entrances.

You can pass through a ghost unharmed

Pac-Man can pass right through a ghost without being harmed. This happens when Pac-Man and an approaching ghost enter the tile at the exact same time. The window of opportunity is so small (1/60th of a second) that it rarely happens.

Ghosts prefer to move directions in this order: up, left, down, right. However, “target tiles” override these choices.

Pinky’s does not target Pac-Man’s current tile directly. Instead, his target tile in chase mode is a tile offset four tiles away from Pac-Man in the direction Pac-Man is currently moving. This is why Pinky seems to often move ahead and “block” Pac-Man.

Pinky sometimes seems to run away from Pac-Man

Pinky’s target tile is four tiles away from Pac-Man in the direction Pac-Man is travelling. If the target tile calculated by Pinky falls behind Pac-Man, Pinky will turn right before he reaches Pac-Man in an attempt to get behind him. For this reason, when Pinky approaches Pac-man, a player can jiggle the control back and forth, a technique known as head faking, to make Pinky turn away.

Inky’s tile-targeting scheme is more complex than any of the other ghosts. It takes into account Pac-Man and Blinky’s current tiles. This is why Inky’s behavior is more unpredictable than the other ghosts.

Clyde’s tile-targeting scheme is more complex than Blink and Pinky’s but less complex than Inky’s. If Pac-Man is more than 8 tiles away, Clyde’s target tile will be Pac-Man’s current tile. If Clyde is closer than 8 tiles to Pac-Man, he will switch to scatter-mode targeting and head for his own corner of the board until he is far enough away to target Pac-Man again. It is for this reason, in special circumstances, Pac-Man can park in a corner and force Clyde into an endless circle pattern.

Random objects appear during the game which can be eaten for extra points. They are a cherry, strawberry, peach, apple, grapes, Galaxian, bell, and a key. All objects are food except for three. The Galaxian was a tribute to the Galaxian game which was being developed by Midway at the same time as Pac-Man. Nobody knows why the bell and key were included in the selection of fruits.

The game ends at level 256 and enters a split-screen

It is impossible to proceed pass level 256. The reason is a bug in the game that causes the board to go into “split screen” with the left side of the screen playing normally but the right side of the screen drawing a bizarre series of seemingly random shapes. Hidden behind the shape are 9 dots that can be eaten by a player if they can blindly find them.

A perfect score would be 3,333,360 points and is achieved when the player eats every dot, energize, fruit, and blue ghost through level 256. Some players have achieved this score.