DC Comics shatters racial barriers with the introduction of Tim Fox as the first black Batman!

DC Comics shatters racial barriers with the introduction of Tim Fox as the first black Batman!

In this second Future State: Batman chapter, wearing a mask in Gotham City is now a crime—and when it’s compounded with murder, it can be a shoot-on-sight offense! Batman is on the trail of a murderous couple but quickly finds that all is not as it seems…and finds himself in the firing line of the Magistrate and their Peacekeepers! The gritty, street-level adventures of the new Dark Knight continue! Also in this issue, Batgirls Cassandra Cain and Stephanie Brown find themselves in a prison where the Magistrate throws heroes and villains alike! What no one knows, though, is that Cassandra was sent there with a mission… And in a story of the Gotham City Sirens, some girls just want to have fun—so what do you do when you find Gotham City in turmoil and overrun by Cybers? You go shopping, of course! Join Catwoman, Poison Ivy, and a new Siren on a gal’s night out. They’re on the town, looking for trouble…and finding it!

This collector’s pack includes the original DC Comics Future State The Next Batman #2 cover and both variant covers (including Tim Fox unmasked). Pack includes the following: 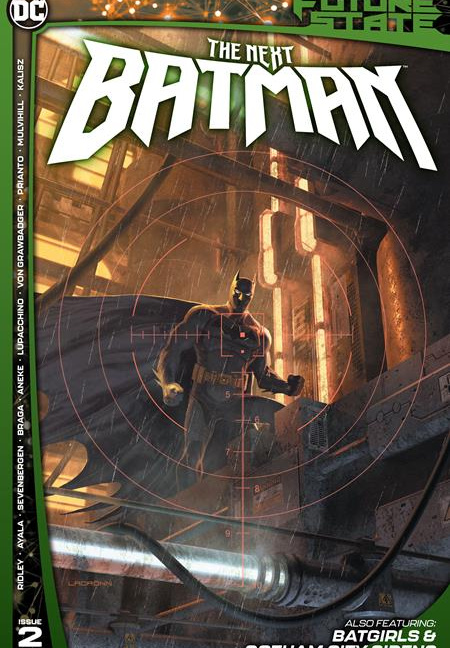