Extra, extra! Read all about it! Harry Potter, The Boy Who Lived, grants hope to all that Voldemort can indeed be defeated! Own the historic news with this Harry Potter Poster.

Own the historic Daily Prophet newspaper with this Harry Potter Poster

Extra, extra! Read all about it! Harry Potter, The Boy Who Lived, grants hope to all that Voldemort can indeed be defeated! Own the historic front-page newspaper, The Daily Prophet, that rocked London wizards with news that Harry Potter survived a Avada Kedavra curse launched by the feared wizard, Voldemort.

This Harry Potter poster is a replica of the historic Harry Potter headline. Printed on thick, yellowed archive paper, the poster looks just like the real thing but is strong enough to be nailed to your wall. Poster measures 20-inches by 14-inches wide.

Why was Harry Potter called The Boy Who Lived?

Harry survived when Voldemort tried to kill him with the Avada Kedavra curse. No one had ever survived a Avada Kedavra curse before and it wasn’t supposed to be possible. But since his mother willingly sacrificed her life for him, her love protected him from Voldemort’s curse. Instead, the curse struck Voldemort and he unwillingly created another Horcrux in Harry. This would eventually lead to Voldemort’s defeat as it gave Harry knowledge of Voldemort as well as ensuring that when Voldemort would try to kill Harry again, it wouldn’t work the second time around either. It would instead destroy the Horcrux that Voldemort never intended to create. 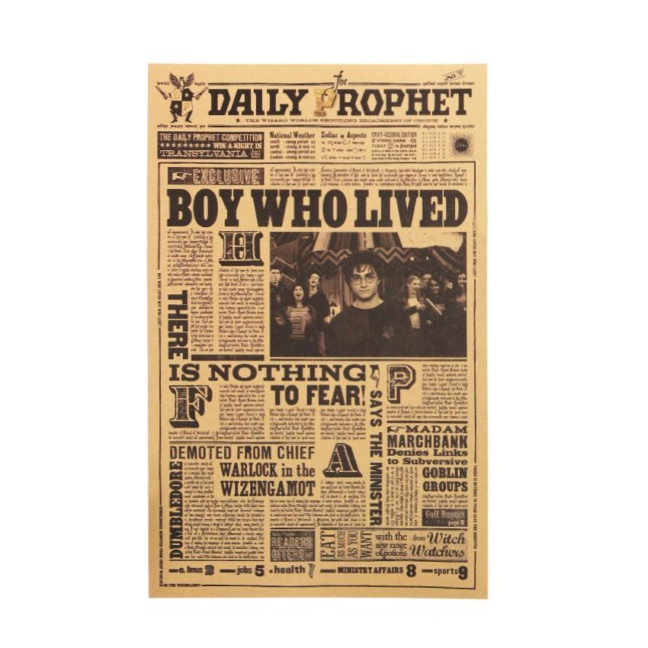