This Infinity Gauntlet glove contains the most powerful objects in the Universe – all six Infinity Stones! It serves as a bottle opener but makes a really cool decoration or fidget toy.

This Infinity Gauntlet glove contains the most powerful objects in the Universe – all six Infinity Stones! It serves as a bottle opener but makes a really cool decoration or fidget toy. Solid, heavy pewter metal, it is a whopping 4-inches long by almost 2-inches wide. Excellent detail and the “jewels” really sparkle. This piece will get lots of oohs and aahs from lookers.

As seen in the Avengers movie, here are the stones (gems) the Infinity Gauntlet glove contains.

The story of the Infinity Gauntlet glove

The Infinity Gauntlet glove was made by Dwarves at the request of Thanos. He wore it on the left hand and inserted the Infinity Stones one-by-one until he collected the final Power Stone, which he used to torture Thor until Loki gave up the Space Stone. He acquired the Time Stone from Dr. Strange after agreeing to spare Iron Man’s life. With a snap of his fingers, Thanos eradicated half of all life in the universe. He escaped to an alien farmland where he used the Infinity Stones’ own power to destroy them thus ensuring the Snap could never be undone.

The Avengers eventually tracked Thanos down. When he revealed that he had destroyed the Infinity Stones, Thor killed him, With all hope of undoing the Snap completely exhausted, the Avengers left the planet leaving the charred and useless Infinity Gauntlet behind.

In the movie, the Infinity Gauntlet glove was crafted at Thanos’ request. Thus, it does not match the rest of Thanos’ uniform. In the comic book version of events, the Infinity Gauntlet was a glove from Thanos’ own armor that was modified to fit the stones. Thus in the comic books, the glove matches the rest of Thanos’ uniform. 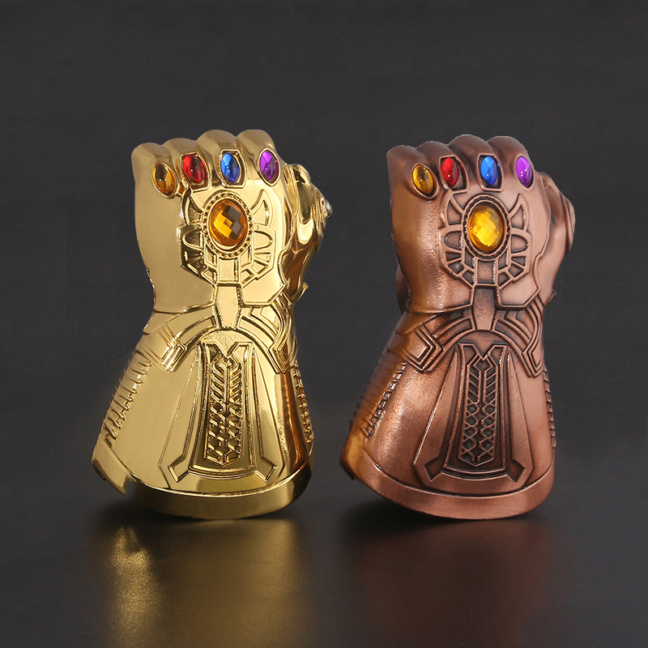