Knowledge is the key and this lock pick set will ensure you’re not locked out and left behind.

If you’ve never owned a lock pick set, stop reading and buy this one now. They are loads of fun and a cool skillset to show off. This set from our underground accessories section, includes 24 quality pieces with a case and a clear practice lock that lets you see the action of the pins while you pick the lock.

Rake picks have multiple peaks. A rake pick with two peaks is a double peak rake while a rake with three picks is a triple peak rake (also known as a Bogota rake). The humps and bumps of the rake pick help them manipulate as many pins as possible in the shortest amount of time. This lock pick set includes nine rake lock picks.

Hook picks have a hook-shaped tip. They are sometimes referred to as a “feeler” or “finger”. They are precision lock picks and ideal when you have to pick a lock one pin at a time. This lock pick set includes six hook lock picks.

Tension wrenches are use to apply torque to the lock plug to hold picked pins in place. This lock pick set includes three tension wrenches.

Like anything else, picking a lock requires practice. But first, you must understand how a pin tumbler lock works. The concept has been around since at least 4,000 BC.

An outer cylinder casing (also called the shell, housing, or body of the lock) (green in the diagram below) holds a plug (yellow). The plug rotates freely within the housing creating a “rotational shear line”. The plug has an opening where the key is inserted. The small gap between the top of the plug and the outer casing is called the shear line (the darker outline at the top of the yellow plug – runs behind the purple driver pins). If the shear line is obstructed in any way, the plug and housing become “locked” and the plug will not turn.

The plug has 5 or 6 holes dribbled into it where pins set. The key pins (red) are what the key brushes against when inserted into the keyhole. The driver pins (blue) are spring loaded – they are kept pushed down by the spring located above them. The driver pins are what obstruct the shear line.

But in diagram 3, the correct key is inserted and the gap between the driver pins and key pins falls precisely on the shear line. This lets the key turn, as seen in diagram 4, which unlocks the lock.

Here is an animation showing how a lock works:

How to pick a lock – an introduction 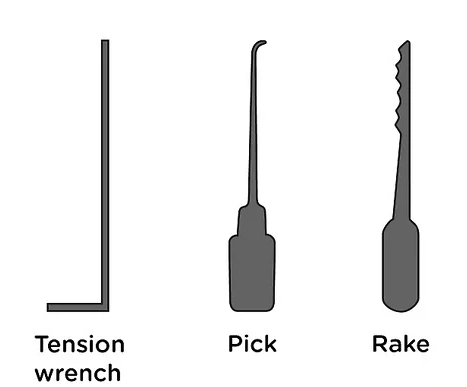 When picking a lock, the objective is to align all the pins at the correct height so that they all fall on the shear line. This can be done with a lock pick set.

To pick a pin tumbler lock, first insert a tension wrench into the bottom of the keyhole and turn the lock slightly until you feel a little bit of pressure. Only a very light amount of force is needed. Then insert a lock pick and begin lifting the pins, one by one, while applying just the right amount of torque on the plug with the tension wrench. When a pin lines up properly, the torque from the tension wrench holds the pin in place while you begin working on the next pin. Technically what is happening is the key pin drops down and the driver pin catches on the edge of the plug, staying above the shear line.

You’ll keep lifting pins with your pick and applying pressure with your tension wrench, until all the driver pins have cleared the shear line.

Single pin picking (SPP) is a style of lock picking in which you located and set one pin at a time. It’s the purest form of lock picking. A hook pick from this lock pick set is used and works in a similar manner as a rake pick but you set each pick by “feeling” the pin settle in place rather than raking against the pins.

Insert the hook pick all the way into the lock and locate the rearmost pin. “Feel” the pin lift with the tool. Lift the pin and set it. When the pin sets, you will feel a slight slip of the plug and maybe even a subtle clicking sound. Once you’ve set the first binding pin, repeat the steps with each subsequent pin. Find the next pin that feels stiff and gently continue to lift that pin until the plug slips.

Once every pin has been set, the shear line will clear, the plug will freely rotate, and the lock will open.

Using a rake pick to pick a lock

Raking is sometimes a shot in the dark. It can be a very fast way to pick a lock but many modern locks are impossible to rake pick.

Let’s say we are using a rake from this lock pick set to pick the lock. While applying slight pressure with the tension wrench, insert the rake all the way to the back of the lock. Scrub or rake the inside of the plug with the pick with a motion similar to brushing  your teeth. As you pull the pick back, life it up slightly in order to apply pressure on the pins. Keep applying torque with the wrench and scrubbing the pins until they are all set.

If the pins do not set within 10 seconds, release the tension to reset the lock and begin again.

How a wafer lock works

In a cylindrical wafer tumbler lock, a series of flat wafers holds a cylindrical plug in place. The wafers are fitted into vertical slots in the plug, and are spring-loaded, causing them to protrude into diametrically opposed wide grooves in the outer casing of the lock. As long as any of the wafers protrude into one of the wide grooves, rotation of the plug is blocked, as would be the case if there was no key, or if an improperly bitted key were inserted.

A rectangular hole is cut into the center of each wafer; the vertical position of the holes in the wafers vary, so a key must have notches corresponding to the height of the hole in each wafer, so that each wafer is pulled in to the point where the wafer edges are flush with the plug, clearing the way for the plug to rotate in order to open the lock. If any wafer is insufficiently raised, or raised too high, the wafer edge will be in one of the grooves, blocking rotation.

Without a key in the lock, the wafers (red) are pushed down by springs. The wafers nestle into a groove in the lower part of the outer cylinder (green) preventing the plug (yellow) from rotating. 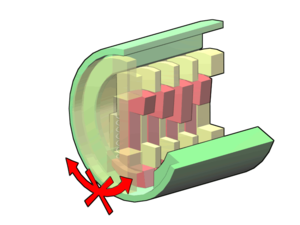 When the correct key is inserted, the wafers (red) are raised up out of the lower groove in the outer cylinder, but not so high that they enter the upper groove in that cylinder. 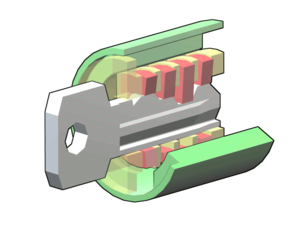 With the wafers unobstructed, the key, wafers, and plug (yellow) can rotate. 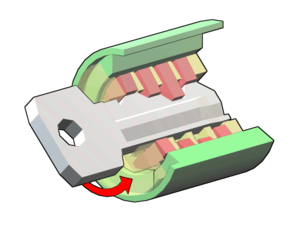 The technique for picking a wafer lock is similar to pin cylinders except special wafer lock picks can be used. Wafer lock picks combine the function of the tension wrench and raking tool into one pick. You insert the wafer pick, apply pressure to create the ledge, then rake and jiggle to set the pins. 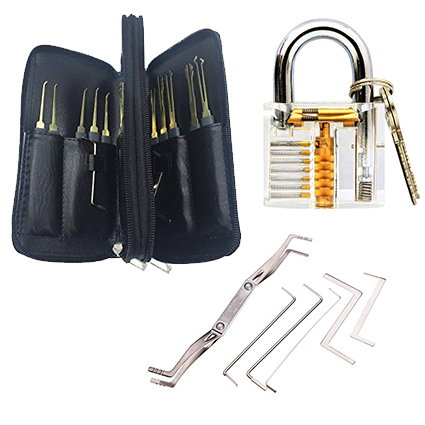