You’ve never seen Star Trek like this before! Using the latest in digital technology combined with ultra-high-quality lenticular printing, this image of the STXI: Enterprise NCC-1701 features true stereoscopic 3-D and no special 3D glasses are needed! Check out the Enterprise NCC-1701 over Saturn! This Star Trek Movie Enterprise NCC-1701 Over Saturn 3-D Print features breathtaking sharpness and color and measures 10-inches tall x 17-inches wide. The prints is suitable for wall display.

Displaced over a century backward through time, Nero, one of the few Romulans to survive the tragic destruction of his home world, sought revenge against Ambassador Spock and the United Federation of Planets for failing to provide help in time to save the Romulan people. Using his massive mining warship, the Narada, Nero and his crew destroyed a fleet of Federation starships and then used perilous red matter to trigger a quantum singularity that obliterated the planet Vulcan. Still intent on spreading his vengeance further, Nero next set his sights on the elimination of Earth itself.

After assuming command of the newly launched USS Enterprise, the only starship to survive Nero’s assault at Vulcan, Cadet James Tiberius Kirk ordered a course to intercept Nero at Earth. Tactically outmatched and outgunned, the Enterprise could succeed only through the element of surprise. Emerging from a precise warp jump within the atmosphere of Saturn’s moon Titan, the Enterprise was able to use the magnetic distortion of Saturn’s rings to hide from Nero’s sensor scans long enough to beam Cadet Kirk and Commander Spock onto the Narada with a desperate plan to defeat the madman and save the Earth. 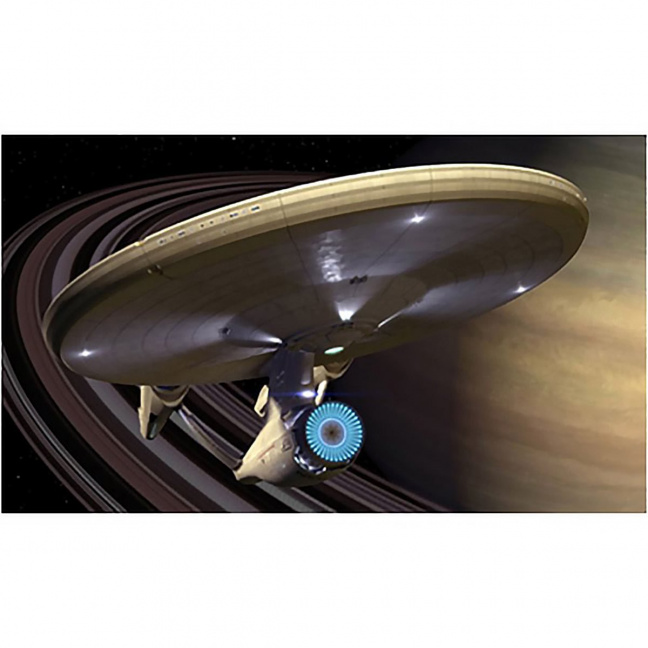