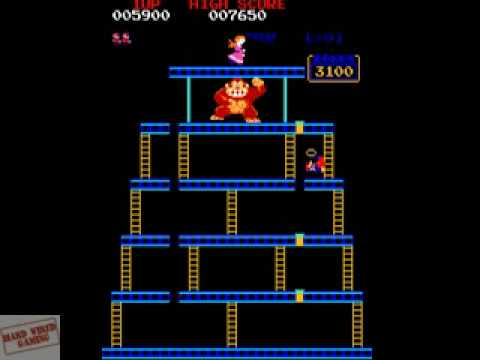 Donkey Kong was released by Nintendo in 1981.  In the game, Jumpman (renamed Mario soon later) must rescue a damsel in distress, Lady (now named Pauline) from a giant ape named Donkey Kong. The hero and ape later became two of Nintendo’s most popular characters.

Nintendo assigned the project to a first-time game designer named Shigeru Miyamoto. Drawing from a wide range of inspirations, including Popeye, Beauty and the Beast and King Kong, Miyamoto developed the scenario and designed the game alongside Nintendo’s chief engineer, Gunpei Yokoi. The two men broke new ground by using graphics as a means of characterization, including cut scenes to advance the game’s plot, and integrating multiple stages into the gameplay.

How the game was named is pretty funny.  Shigeru knew he wanted to name the game after the gorilla, the character he considered to be the strongest.  He looked to name the game “stupid monkey” and using a English dictionary, came across the word “donkey” which meant “stubborn”.  Hence, he named the game “Donkey Kong” not knowing how odd the name would sound to Americans.

Nintendo executives originally hated the game because it was too different from their first person shooters.  Shigeru insisted it would be big so they made a test run in two bars in the United States.  When the bars ordered more units, Nintendo quickly began stripping old Radar Scope games and replacing the innards with Donkey Kong motherboards.