“I’ll kill you, clown boy.” Yikes! Put the creepiest, yet most popular Robin, on display with this 7-inch DC Multiverse Damian Robin Figure from McFarlane.

“I’ll kill you, clown boy.” Yikes! Put the creepiest, yet most popular Robin, on display with this 7-inch DC Multiverse Damian Robin Figure from McFarlane.

Damian Robin can be a little on the creepy side. And he should be! Damian is the genetically engineered son of Batman and Talia al Ghul making him the biological grandson of Batman villain Ra’s al Ghul. And he could be the potential inheritor of Wayne Enterprises! This despite his tendency for violence, self importance, and the inate ability to kill at a very young age, Damian Robin is ranked #1 in IGN’s Top Ten Best Robins and No. 6 in Newsarama’s 10 Most Popular Comic Book Characters.

This Damian Robin figure is based off his look in the DC Comics Teen Titans 2018 comic book series. This DC Multiverse Damian Wayne Robin 7-Inch Action Figure features ultra articulation with 22 moving parts providing a full range of posing possibilities. Damian comes with a Batagrang throwing star, sword, and a base for display. Also included is a collectable art card with Teen Titans #20 artwork on the front and character biography on the back. 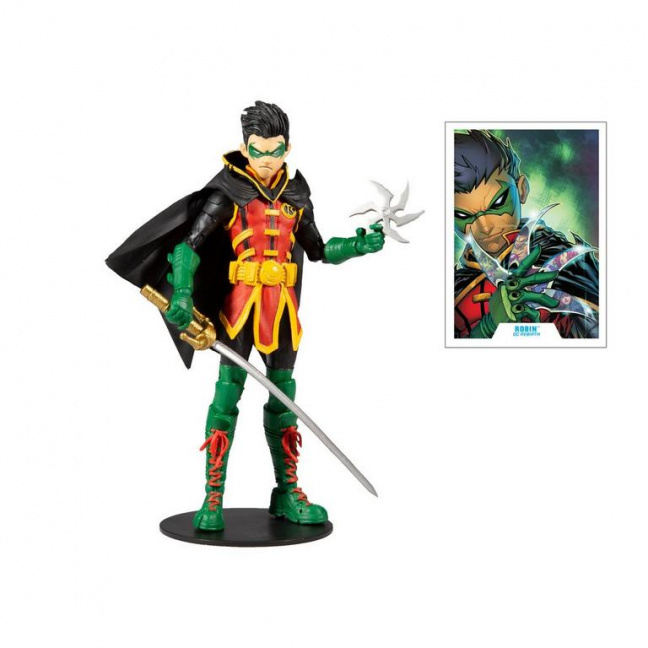