No worries. Your ultimate bio-hacker, The Drowned Action Figure, can be safely displayed on your shelf. No oxygen tank required.

No worries. Your ultimate bio-hacker, The Drowned Action Figure, can be safely displayed on your shelf. No oxygen tank required.

The Drowned is a Batman story arc like no other. You see, Bryce Wayne of Earth -11 is somewhat of a pschopath. She harbored a deep hatred of the Atlanteans for their role in the death of her beloved, Sylvester Kyle.

In a quest to avenge Kyle, she spliced her DNA with that of an Atlantean, obtaining  the ability to control water, breathe underwater, heal faster, and bolster muscular, skeletal and bodily tissue density, along with the capability to perform a type of dark hydrokinesis which could corrupt and convert those fighting against her into ravenous sea beasts under her command. The end resutl? A super-powered Dark Knight called The Drowned capable of breathing and fighting underwater alongside her hybridized sea creatures, “Dead Water”.

Based off his look in Batman: The Drowned, this DC Multiverse The Drowned 7-Inch Action Figure from McFarlane features ultra articulation with 22 moving parts for a full range of posing possibilities. Earth -11’s Batman comes with The Drowned Trident and base. Also includes a collectable art card with Batman: The Drowned #1 artwork on the front and character biography on the back. 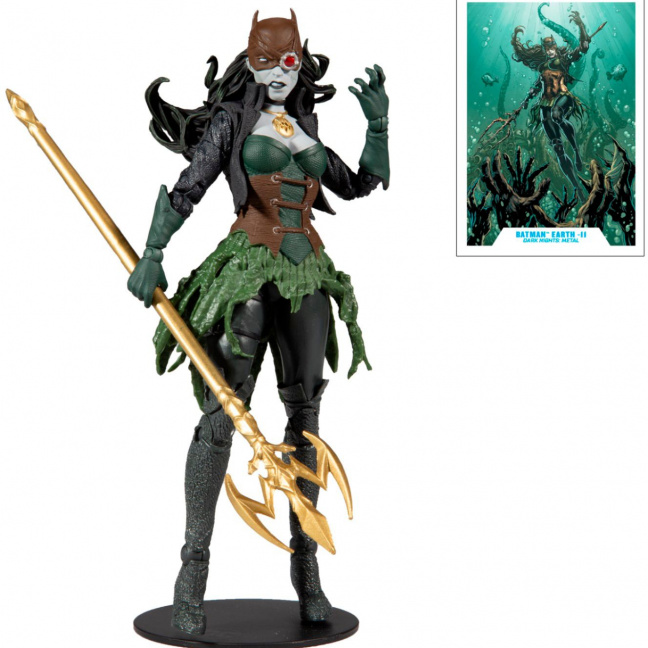