Daredevil starred in comics from Lev Gleason Publications during the 1930s–1940s period. Although he is a distinct character from Marvel Comics’ Daredevil, he is considered a forerunner to DC’s Batman character.

Daredevil starred in comics from Lev Gleason Publications during the 1930s–1940s period. Although he is a distinct character from Marvel Comics’ Daredevil, he is considered a forerunner to DC’s Batman character.

The Daredevil story is remarkably similar to Batman’s, which appeared on the comic book market about a year later. As a child, Bart Hill had been rendered mute by the shock of seeing his father murdered and himself being branded with a hot iron on his chest in the shape of a boomerang (yes, similar to the Batman bat logo). Orphaned, he grew up to become a boomerang marksman. Like Batman, introduced a year earlier, he donned a costume to wage anonymous vigilante vengeance.

Daredevil Battles Hitler (July 1941), was the premiere issue of Daredevil Comics. Written by Charles Biro with art by Bob Wood, Daredevil and other Silver Streak heroes fought the German chancellor. As with Captain America Comics #1 (March 1941), the comic anticipated U.S. involvement in World War II. Biro’s 16-year run as writer, would make the character one of the most acclaimed of the Golden Age of comics.

Biro introduced popular supporting characters in Daredevil including the Little Wise Guys in Daredevil #13 (Oct. 1942). A “kid gang” similar to DC Comics’ Newsboy Legion, the group consisted of Curly, Jocko, Peewee, Scarecrow, and Meatball – the last of whom, with remarkable daring, was killed two issues later. 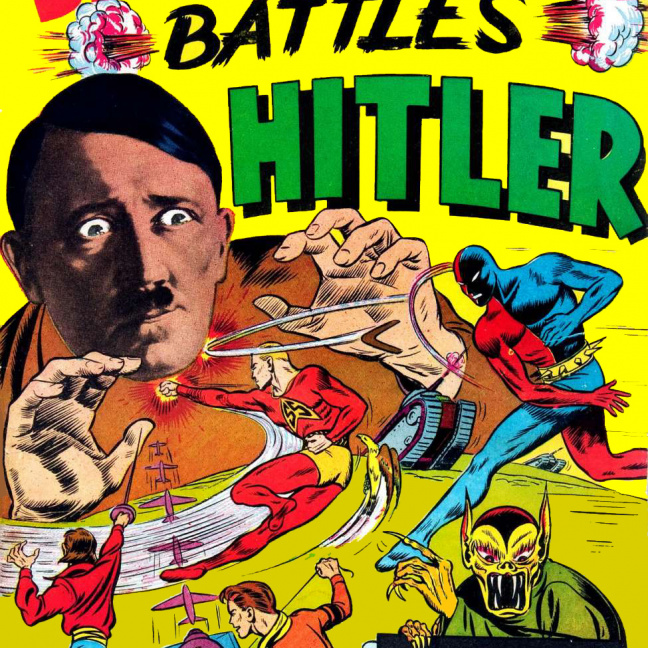