Assemble your own carnivore with the Tyrannosaurus Rex Skeleton Metal Earth Dinosaur Model Kit! Use the easy-to-follow instructions included with the metal sheets to pop out the pieces, bend the tabs, and connect them at the attachment points to create a stunning 3D metal dinosaur!

With this 3D Dinosaur model kit, you can assemble your very own Tyrannosaurus Rex

Assemble your own carnivore with the Tyrannosaurus Rex Skeleton Metal Earth Dinosaur Model Kit! Use the easy-to-follow instructions included with the sheets to pop out the pieces, bend the tabs, and connect them at the attachment points to create a stunning 3D metal dinosaur!

The species tyrannosaurus rex (aka “king of the tyrant lizards”), is one of the most well-represented of the large dinosaurs. Tyrannosaurus was a bipedal carnivore with a massive skull balanced by a long, heavy tail. Fossil evidence shows that the T-Rex was about 40-feet long and up to 20-feet high! This tyrant lizard was on the largest carnivores that ever lived.

To date, about 20 almost-complete t-rex skeletons have been discovered, the most notable of which was “Sue”, the super skeleton (over 90% complete) that was sold to the Chicago Field Museum for $8 million dollars.

And by the way, that Tyrannosaurus chase scene in Jurassic Park, the one where the dinosaur chases the car travelling 45 miles per hour. Yeah, that couldn’t happen. T-rex was massive and scientists calculate that about 86% of its muscle mass would have to be concentrated in the legs to reach those speeds. Instead, it is believed the Tyrannosaurus Rex ran at a measly 12 miles per hour. 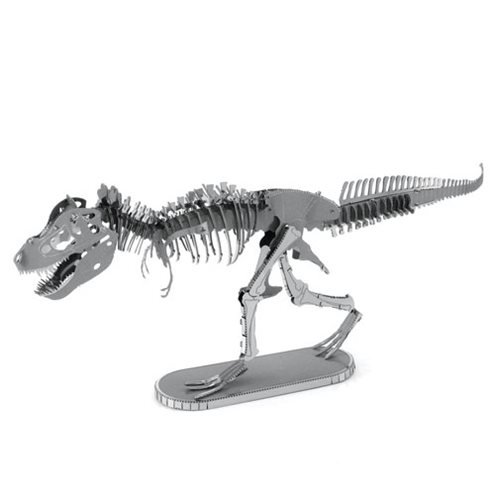