Eerie was a one-shot horror comic book cover-dated January 1947 and published by Avon Periodicals as Eerie #1. Its creative team included (among others) Joe Kubert and Fred Kida. It was the first true, stand-alone horror comic book and is credited with establishing the horror comics genre. After the initial issue, the title went dormant for a number of years but returned to newsstands as an ongoing title in 1951.

This premiere issue featured six stories that were fairly tame in the depiction of the gore and violence generally found in horror fiction. “The Eyes of the Tiger” follows a man haunted by the ghost of a stuffed tiger; “The Man-Eating Lizards” (with a script by Edward Bellin and pencils by Joe Kubert), tells the story of an island infested with flesh-eating lizards; and another, “The Strange Case of Henpecked Harry” (with art by Fred Kida), follows a man spooked by the bloody corpse of his murdered wife. Other feature stories include “Dead Man’s Tale”, “Proof”, and “Mystery of Murder Manor”. A two-page humorous tale starring Goofy Ghost rounds out the issue. 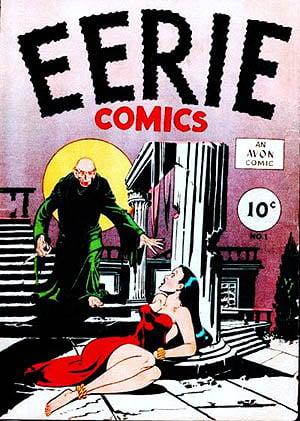