A series of blunders during the introduction of Captain Marvel (Shazam) makes this not just the first appearance of Shazam, but one of the rarest comic books in existence. Only three copies are known to exist! Remastered and digitally enhanced.

A series of blunders during the introduction of Captain Marvel (Shazam) makes this not just the first appearance of Shazam, but one of the rarest comic books in existence. Only three copies are known to exist! Remastered and digitally enhanced.

After the success of National Comics’ new superhero characters Superman and Batman, Fawcett Publications started its own comics division in 1939, recruiting staff writer Bill Parker to create several hero characters for the first title in their line, tentatively titled Flash Comics. Besides penning stories featuring his creations Ibis the Invincible, the Spy Smasher, the Golden Arrow, Lance O’Casey, Scoop Smith, and Dan Dare for the new book, Parker also wrote a story about a team of six superheroes. Each superhero in this team possessed a special power granted to them by a mythological figure.

Fawcett Comics’ executive director Ralph Daigh decided it would be best to combine the team of six into one hero who would embody all six powers. Parker responded by creating a character he called “Captain Thunder” (Billy Batson). Staff artist Charles Clarence “C. C.” Beck was recruited to design and illustrate Parker’s story, rendering it in a direct, somewhat cartoony style that became his trademark.

“When Bill Parker and I went to work on Fawcett’s first comic book in late 1939, we both saw how poorly written and illustrated the superhero comic books were. We decided to give our reader a real comic book, drawn in comic-strip style and telling an imaginative story, based not on the hackneyed formulas of the pulp magazine, but going back to the old folk-tales and myths of classic times.”

The first issue of the comic book, printed as both Flash Comics #1 and Thrill Comics #1, had a low print run in the fall of 1939 as an ashcan copy created for advertising and trademark purposes. Shortly after its printing, however, Fawcett found it could not trademark “Captain Thunder”, “Flash Comics”, or “Thrill Comics”, because all three names were already in use! Consequently, the book was renamed Whiz Comics, and Fawcett artist Pete Costanza suggested changing Captain Thunder’s name to “Captain Marvelous”, which the editors shortened to “Captain Marvel”. The word balloons in the story were re-lettered to label the hero of the main story as “Captain Marvel”.

Overstreet says three copies of this issue exist, while four appear on the CGC census. In the Comic Book Marketplace survey of the “50 Rarest Golden Age Comic Books,” this was tied for fifth place. A CGC 8.0 copy sold for $11,400 in the July 2003 Heritage auction. Overstreet does not list a value for this comic. 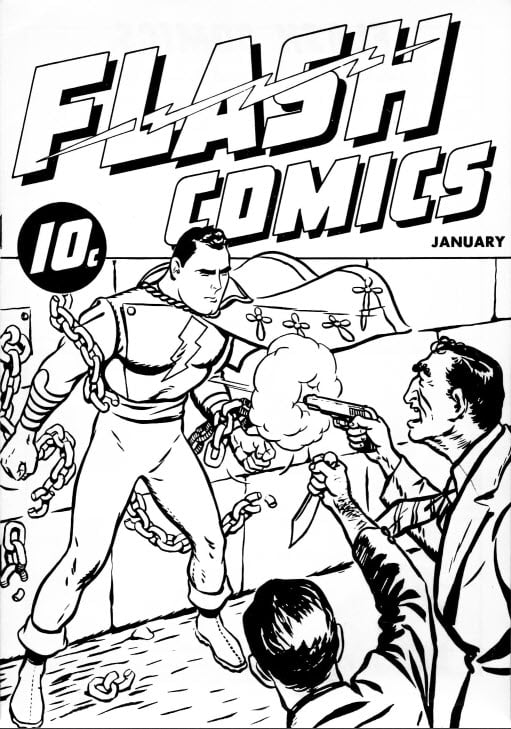