Is it a weapon or a prop? This Metal Collapsing Trick Cane weighs more than a quarter-pound and opens in the blink of an eye!

Is it a weapon or a prop? This Metal Collapsing Trick Cane weighs more than a quarter-pound and opens in the blink of an eye!

This Metal Collapsing Trick Cane resembles the classic Chinese finger cuffs. It is constructed from a tightly coiled metal strip that stays collapsed with a Harakan-stopper mechanism. When the stopper mechanism is released, the cane unwinds in the blink of an eye.

Photo note: We used stock photos for this and it seems as if they doctored them up a bit (ahem). The cane is not as “smooth” when expanded as the photos would suggest. Look through all the pictures and you’ll see some where the coils are clearly visible. Not rough surfaced when opened by any means, but not completely smooth as the pics suggest.

Note: To close mechanism, loosen the base of the coil by twisting to allow for more room for the staff to collapse. If it still tightens when collapsing, keep loosing the staff at the base until it is completely collapsed. Similarly, if the metal becomes unwound, loosen the coil and slowly wrap the strip back around itself.

WARNING: Cane is collapsed tight and edges are sharp! Use a piece of wood or other sturdy object to press the cane back into its compressed state. Make sure it is loosened as described above to make collapsing easier. And it opens violently fast! Make sure the area around you is clear before opening. Yes, it will poke your eye out!

Be the first to review “Metal collapsing trick cane – pocket-sized 2-inches when collapsed – more than 3-feet when expanded!” Cancel reply 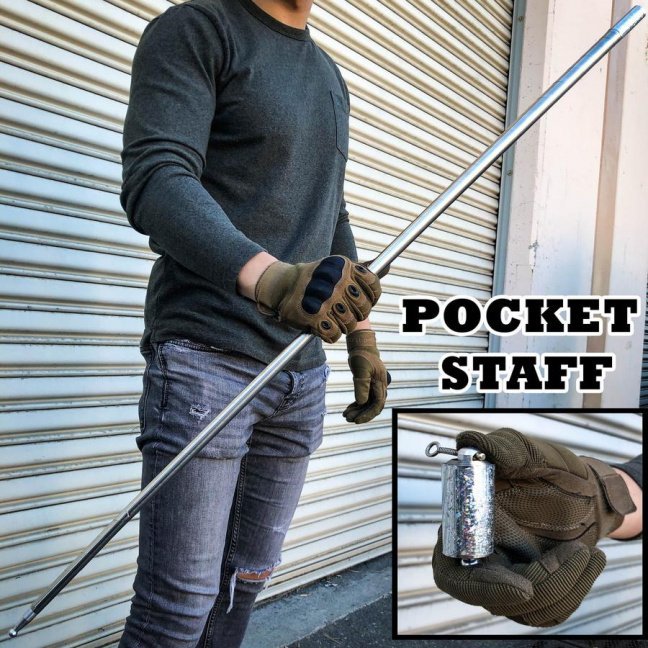