The Timmy Bird Ornithopter toy has durable tearproof wings that allow him to soar up to 25 yards indoors or outside on a mild day.

This amazing ornithopter toy has been delighting all ages for over forty years.

The Timmy Bird Ornithopter toy has durable tearproof wings that allow him to soar up to 25 yards indoors or outside on a mild day. The ornithopter is an amazing mechanical device created in France in 1969 by Gérard De Ruymbeke. A rubber band is used to power the precision gear components that allow TIM to flap his own wings and soar. Timmy flaps his wings and flies like a bird.

Simply pull the lever under the right wing, hold the bird upside down and turn the handle 50 times. Lift the tail and adjust the angle to achieve the desired flight direction, this enables the bird to climb and turn. Finally press the switch under the right wing, once the wings begin to flap, gently launch the bird into the wind.

From the Greek words ornithos “bird” and pteron “wing”, an ornithopter is any aircraft that flies by flapping its wings. Birds were the inspiration to Leonardo da Vinci when he designed an ornithopter in 1490. He never saw the ornithopter fly however, because it was heavy and required too much energy to produce lift and thrust. In 1929 a human-powered ornithopter, constructed by Alexander Lippisch, was towed into the air and glided. The first toy ornithopter was sold in Paris in 1879. 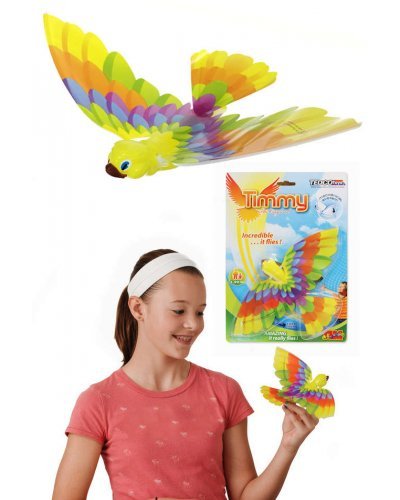 You're viewing: The original Timmy Bird Ornithopter toy – flies by flapping wings like a real bird $9.99
Add to cart
Posting....