Spin the Rattleback Spinner Toy clockwise and watch it stop, rattle up and down and then spin in the other direction!

Spin the Rattleback Spinner Toy clockwise and watch it stop, rattle up and down and then spin in the other direction! A scientific curiosity whose ancient and mysterious properties capture the attention of all ages. It also magnifies when positioned on its flat side.

The rattleback spinner toy has an unusual shape – flat on top and an asymmetrical ellipsoidal bottom. This is what is believed to cause its curious spinning action. Its motion has been studied by many scientists, but the reason behind its unusual behavior remains elusive. The simple explanation is that the long axis of the ellipsoid is not parallel to the long axis of the flat top – hence its predisposition to spinning in one direction. Some exceptional rattlebacks however will mysteriously reverse when spun in either direction. Maybe yours will meet this baffling criteria?

Rattleback spinners have been around for thousands of years. In that time, they’ve gone by many names including anagyre, celt, Celtic stone, rebellious celt, rattlerock, spin bar, wobble stone and wobblestone. The first rattleback spinners toys were made from wood. This modern Rattleback Spinner Toy is made from brightly colored, durable acrylic resin.

How the Rattleback Spinner Toy works – the physics behind the rattleback

When you spin a rattbleback one way, it turns a few times before the ends start to rattle up and down. The more it wobbles, the slower it rotates – until it stops spinning altogether. Finally, it starts to spin in the opposite direction. What could possibly cause this?

The first attempt to analyze rattlebacks was around a century ago. In the mid-1980s, two detailed mathematical analyses were done: one by Hermann Bondi (then Master of Churchill College, Cambridge) and the other by Mont Hubbard (Professor of Mechanical Engineering at the University of California, Davis). Bondi and Hubbard agreed that the rattleback’s amazing behavior needs three main ingredients.

“It’s only clear through the equations. I don’t intuitively understand it.”

However, to make it more complicated, the point of contact is moving all the time and the torque changes. If the inertial and symmetry axes of the rattleback spinner toy were the same, the average torque over a single oscillation would be zero. But for the rattleback, there is a net torque in one direction. And it is this that reverses the angular momentum. 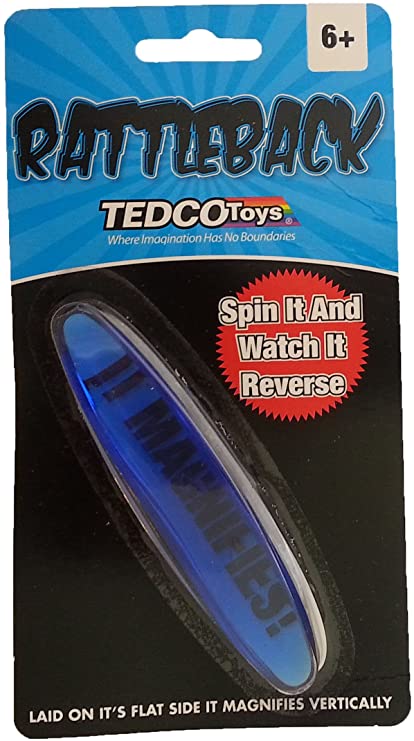