The Suicide Squad Movie Peacemaker Action Figure is more than willing to fight, kill, maim, and even start a war all in the name of peace (ahem).

The Suicide Squad Movie Peacemaker Action Figure is more than willing to fight, kill, maim, and even start a war all in the name of peace (ahem).

A huge, hulking specimen with muscles on his muscles, Peacemaker is a world-class marksman—just like his fellow Squad member, Vigilante, but if you ask him, better. He’s more than willing to fight, kill, and even start a war, but of course it’s all in the name of keeping the peace (ahem).

The incredibly detailed 7-inch scale Peacemaker action figure figure is based off of Peacemaker’s look in DC Comic’s The Suicide Squad movie. Peacemaker is designed with ultra articulation with up to 22 moving parts for full range of posing and play. Peacemaker comes with a sword and a base. Included collectable art card with Peacemaker movie photography on the front, and character biography on the back. Also included is a piece of King Shark. Collect all 4 figures in Wave 5 to build a King Shark figure (each sold separately).

Check out the entire incredible DC Build-A Wave 5 Suicide Squad Movie Action Figures! This wave includes hugely popular Harley Quinn and soon-to-be-popular streaming star Peacemaker, but it also includes Polka Dot Man and Bloodsport. And that’s not all! Each figure comes with a part of the massive King Shark, making this one of the most spectacular collections of action figures of the year. 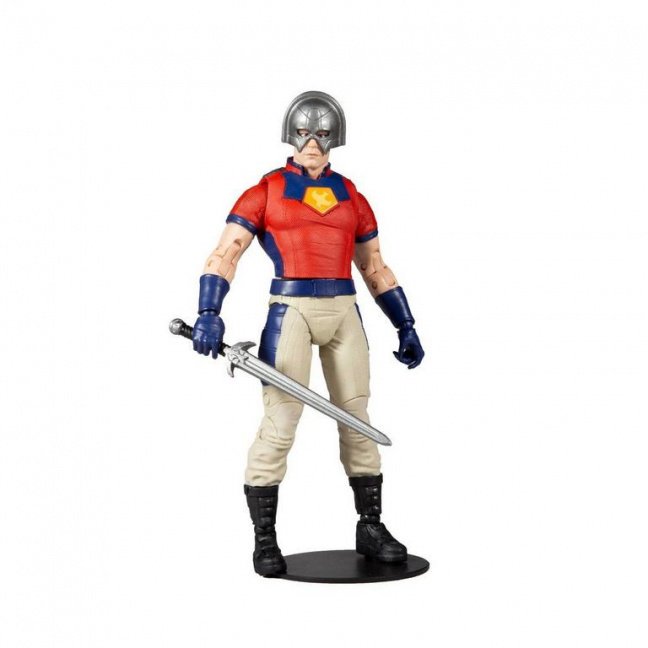