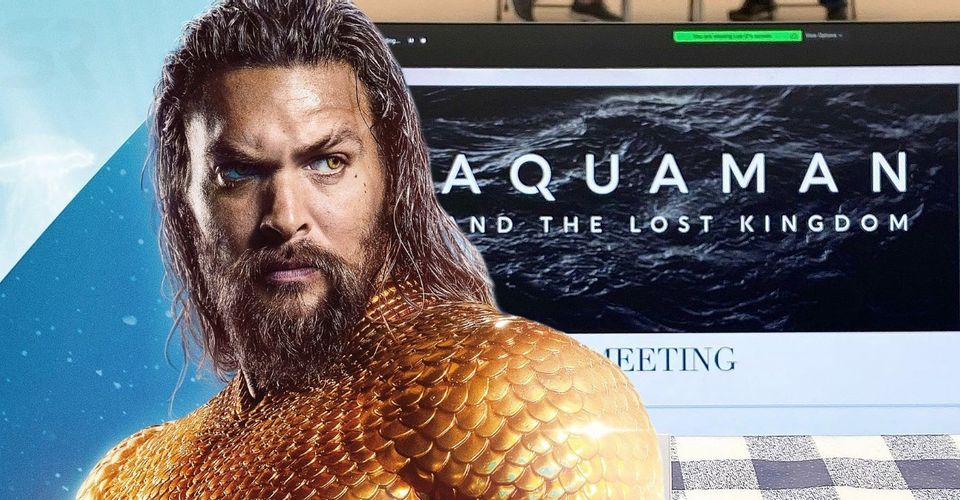 Introduction to Aquaman and the Lost Kingdom

With the surprise success of Aquaman in December 2018, Warner Bros. began work on a sequel. Aquaman co-writer (and frequent Wan collaborator) David Leslie Johnson-McGoldrick was tasked with writing the screenplay based on a story idea by star Jason Momoa (Aquaman) himself, and filming is now due to begin in Summer 2021. The movie will be directed by James Wan.

The official synopsis for the film reads:

“From Warner Bros. Pictures and director James Wan comes an action-packed adventure that spans the vast, visually breathtaking underwater world of the seven seas, “Aquaman,” starring Jason Momoa in the title role. The film reveals the origin story of half-human, half-Atlantean Arthur Curry and takes him on the journey of his lifetime—one that will not only force him to face who he really is, but to discover if he is worthy of who he was born to be… a king.”

Today, it was announced that Aquaman and the Lost Kingdom has officially been pushed to 2023. According to Variety, the film was pushed due to COVID-19 related production delays in the visual effects department. The film moved from a Christmas release date in 2022 to a March 17, 2023 release date.

DC released a tiny snippet of footage from Aquaman and the Lost Kingdom in what is officially the first footage released for the film. The video gives us only a brief look at Aquaman sitting on his throne and standing above a valley. Check it out in the teaser trailer below.

Looks like the “wrap” on December 9 was just for Jason Momoa. According to an Instagram post from director/producer James Wan, filming has now officially wrapped on “Aquaman and the Lost Kingdom”. Wan said:

A THOUSAND THANK YOUs to all the incredible crew who worked so hard and tirelessly on this picture. Especially the UK portion where we shot 95% of the film. Truly some of the finest artisans and craftspeople I’ve had the good fortune to work with. And big shout-outs to the amazing Hawaiian and Los Angeles units.

I have a very long way to go before it will be ready, but I can’t wait to share this little film with you all.

Warner Bros. today released the “official plot” for Aquaman and the Lost Kingdom. This is in addition to the plot synopsis released during the film’s production…

“When an ancient power is unleashed, Aquaman must forge an uneasy alliance with an unlikely ally to protect Atlantis, and the world, from irreversible devastation.”

With whom will the uneasy alliance be forged? Orm and Black Manta are our best guesses right now.

Jason Momoa has confirmed that production for Aquaman and the Lost Kingdom has officially wrapped. On Instagram he noted:

“Aw man, that’s a wrap. That’s a wrap, Aquaman 2. I have so much to share with you, I wish…I could tell you so much. What an epic day. I love you. So good to have been home to finish this, so many good surprises. Love you and…it’s been a long time. I’m taking a break. Aloha.”

Lead actor Jason Momoa confirmed he has tested positive for COVID-19 during the production of Aquaman and the Lost Kingdom in Hertfordshire. Reports say he is now isolating off-set. It is not certain yet if his absence will delay production.

“But it’s a real headache for the film’s bosses, who are now worrying about having to delay their tight filming schedule. Of course the safety of everyone working on the film is the most important thing and everyone is tested regularly. They are hoping this is a one-off and that they can work around Jason and continue filming on the production.”

Despite only being in production for a few weeks, An Aquaman and the Lost Kingdom featurette was revealed at today’s DC Fandome. October 16, 2021

DC revealed a nice surprise at today’s DC Fandome when they revealed a Aquaman and the Lost Kingdom featurette. In the video, we see Jason Momoa (Aquaman) arriving on set after which he reveals the plotline of Aquaman will relate to environmental issues. We also see some behind-the-scenes footage and yes, Momoa in the new Aquaman suit. Of particular interest, check out Yahya Abdul-Mateen II’s new Black Manta suit.

Check out the video below.

It was announced today that Jani Zhao has been case as a new character, Stingray, Indya Moore as Karson a mutated shark, and Vincent Regan as Atlan, the rule of Atlantis. Randall Park is also set to reprise his role as Dr. Stephen Shin from the first film.

Director James Wan gave us another first this week – a first look at Patrick Wilson’s return as Orm, the Ocean Master. Orm was seen in the last minutes of the 2018 film where he was sentenced to prison. In the set photo from Wan, it appears Orm is a bit disheveled with a castaway-type look

Director James Wan gave us our first look at Aquaman’s new costume via Instagram. Wan describes the suit as a “stealth suit” inspired by the suit worn in the four-part 1986 limited comic book series by Neal Pozner.

James Wan’s Aquaman and the Lost Kingdom will bring back the first film’s composer, Rupert Gregson-Williams.

Gregson-Williams confirmed his return for James Wan’s Aquaman and the Lost Kingdom on an episode of Score: The Podcast.

In an interview with The Hollywood Reporter. Black Mantra star Yahya Abdul-Mateen II says he gets more to do in Aquaman and the Lost Kingdom.

“I think the script is better than it was in the first one. It gives the actors a lot of good storytelling moments. In Aquaman, we just got a small introduction to Black Manta and to some of his motivations. In this one, I get to exercise and breathe a little bit more. I’m showing some different colors with this one.”*

Heard plays aquatic warrior Mera in the franchise and has been the target of an intense lobbying campaign on social media largely driven by Johnny Depp supporters in the wake of the actors’ tumultuous divorce. Producer Peter Safran explained why those cries were ignored.

“I don’t think we’re ever going to react to, honestly, pure fan pressure. You gotta do what’s best for the movie. We felt that if it’s director James Wan, and star Jason Momoa, it should be Amber Heard. That’s really what it was.”

Heard and Depp divorced in 2016 after a whirlwind marriage and have since lobbied allegations of domestic abuse against each other.

Jason Momoa revealed that he will be starting work on the set of Aquaman And The Lost Kingdom tomorrow. The actor has arrived in England where the blockbuster is being shot.

“It is sunny out, it’s amazing, and I’m going to start Aquaman 2 tomorrow. It’s the last day of the brown; I’m going to be a blonde. Supposedly have more fun, I don’t know about that, we’ll test it out. But I’m excited to see James and my whole cast.”

Looks like Aquaman is heading to somewhere cold! Director James Wan announced filming had begun with a movie slate and the working title, Necrus.

According to Aquaman lore, Necrus, like Atlantis, is another domed underwater city. Unlike Atlantis, Necrus has a more unstable status in the ocean. Necrus only exists on the material plane for brief periods of time. It also has no fixed location, always appearing at different points when it, once again, manifests in the sea.